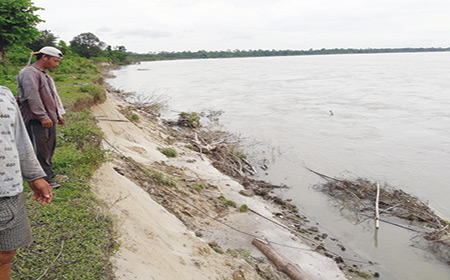 Correspondent
PASIGHAT, Aug 7: The Ministry of Development of North Eastern Region (DoNER) has sanctioned Rs 35 crore for the flood and erosion control project in Mebo sub-division under East Siang district.
The ministry in its letter vide no. NESIDS-11017/1/2019-O/o US (NLCPR) issued on August 1 last intimated Arunachal Pradesh Government about the administrative and financial sanction (AFS) for one-time Central financial assistance for re-building of damaged infrastructure by the floods in 2017.
The project covers renovation of infrastructure, anti-erosion and flood protection works at Sigar, Ralling, Motum, Kiyit, Borguli, Seram, Kongkul, Namsing, Gadum and Mer villages under the Mebo sub-division.
Siang River which is taking serious turn at rural areas of Mebo sub-division has been posing threat to human habitations and bridges along Mebo-Dhola road.
The river has already gripped several acres of fertile cropland at Motum WRC field on its left bank, while the river bank is coming closer to dwelling house at Seram and Kongkul villages. More than 30 families of the villages have been displaced so far due to unabated erosion caused by the river.
The local villagers took an anti-erosion measures on self help basis to protect their fertile land from the grip of mighty river Siang. But their effort went in vain as high tides washed away everything.
Mebo MLA Lombo Tayeng accompanied by water resource engineers visited the erosion affected site during September last year and reported Arunachal Government about the disastrous situation in his constituency.
Later an inter-ministerial team with experts deputed by Chief Minister Pema Khandu visited erosion hit sites of Mebo in East Siang and submitted report of the ground situation.
Chief Minister Khandu subsequently forwarded the proposal to DoNER seeking fund for anti-erosion project in Mebo sub-division.