[ Nellie N manpoong ]
In the government higher secondary school at Longding district, a young boy from class 11 was asked to translate some data collected, in the Wancho language, using the Roman alphabets. When he got down to writing, the young boy realised that he could not write them down in Roman alphabets exactly as they sounded in the Wancho language. He found that the tones differed when he put them into writing; the meanings of the words changed with the change in tones.
Over the years, he would soon learn that it required more than mere letters to capture the essence of a language. 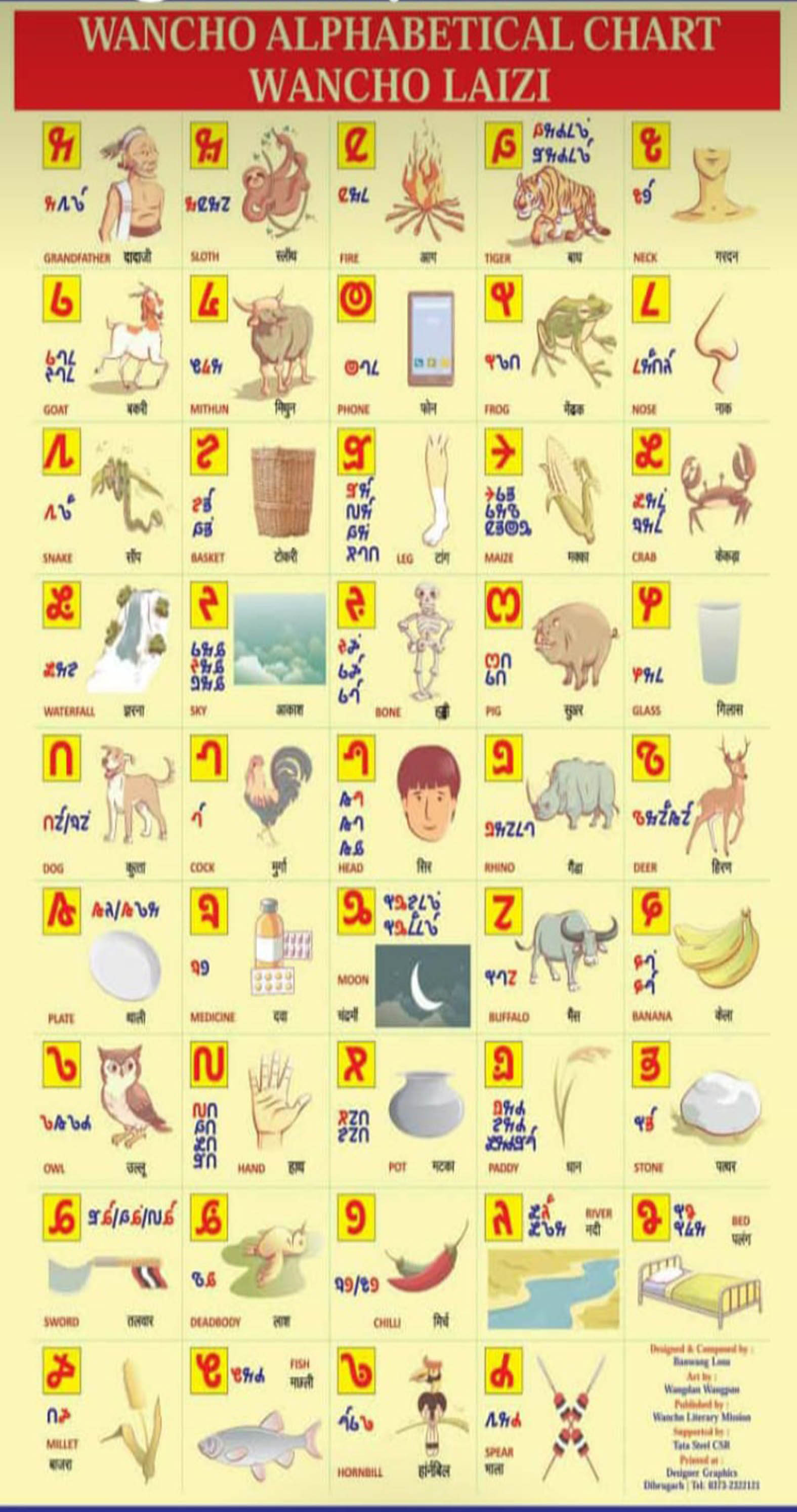 Currently pursuing his masters in linguistics at the Deccan College Post Graduation and Research Institute in Pune, Maharashtra, Banwang Losu tells us how his enthusiasm and curious nature to get to the depth of the Wancho language encouraged him to develop the script and the Unicode for a language spoken largely in Longding district and some parts of Tirap district in the state.
After nearly a decade of research, Losu and a team of expert alphabetologists, such as Michael Everson, Andrew Cunningham, Stephen Morey and Debbie Lotz developed the Wancho Unicode and recently submitted it to the Unicode Consortium.
The development of the Unicode was funded by the National Endowment of Humanities.
The Wancho laizi (Script in upper Wancho) or laili (Script in lower Wancho) has 44 letters, 15 vowels and 29 consonants.
The fonts for the Wancho Unicode have been developed by Losu and Dipangkar Baruah in 24 styles. Baruah has also helped developed the Tai Ahom and Tai Khamti fonts for others.
The Unicode Consortium is a non-profit corporation devoted to developing, maintaining, and promoting software internationalization standards and data, particularly the Unicode Standard, which specifies the representation of text in all modern software products and standards.
It provides a unique code for every character, in every language, in every program, on every platform. This includes popular languages as well as endangered languages.
Trying to break down the subject of Unicode for our readers, Losu said, “A computer recognises numbers and characters and not letters. They store letters and other characters by assigning a number for each one. We receive a slot for the Unicode. Once the codes are entered into the slot they can be utilised in any platform for universal access. A font similar to the font we generally use while writing or typing has to be created for widespread usage. The Unicode font has been created and submitted to the Unicode Consortium and we have received a slot where the letters will be placed. The fonts will be modified by the consortium and made available to users across the world once completed.”
A native of Kamhua Noknu village in Longding district, Losu says that the Wanchos have different dialects, or rather different tones- upper, middle and lower. “One word can mean several things depending on the tone of the speaker,” he informs.
“The Tai Khamti language has 10 diacritics that are used to mark tone levels. The Apatani language has six. The meaning of a word changes with the tone. We cannot use English to write these languages,” he informs, adding: “The Wancho language has three tones- normal, medium and high. Any other language that uses three tones can use our language to translate it into their language while putting it into writing. Any language that has more than three tones cannot translate it exactly as it is. If the tone changes, the meaning also changes. The sound or tone of a language is essential to capturing the true essence of a language.”
“According to the 2011 census, there are over 56000 speakers in Longding district and some in Tirap district. There are also Wancho speakers in the states of Assam and Nagaland in India, and in Myanmar. I found out that there are some Wancho speakers in Bhutan as well, but I was unable to find the exact location on my short trip there. I have to go back and find them,” he said.
The Wancho Cultural Society also played a pivotal role when in 2007, it invited Losu to present a paper on his research during one of its seminars.
“The Wancho Cultural Society and Wancho Students’ Union have been encouraging since the beginning. They invited me as speakers in seminars and workshops on the subject. From there, I began managing my findings and writings in a systematic manner and I came up with the book, ‘Wancho Script’ in 2013 which was published through crowd funding,” Losu adds.
He also attributes the development of his research to friends and elderly villagers who have corrected and encouraged his endeavours.
“They have contributed to the sounds I had left out. I also made sure that I enquired about the different sounds with the elders, so that none of the villages are left out,” Losu said.
Soon after, the Wancho Literary Mission was created with the help of local leaders, which in turn has resulted in the opening of the Sedan Nursery School that began its academic session in June 2019.
The school aims to teach children the Wancho script along with English and Hindi and other nursery subjects.
On whether he would take up any other language to work on, Losu said, “developing a script takes up a lot of time. It is a heavy task that involves a lot of scientific methods and we do not have the technology in our state. We have to listen to micro levels of a sound. We did not have the facilities that are available in the Pune institute when I wrote the book in 2013. I missed out on the diacritic symbols, which are essential to mark different tones as double or triple alphabets do not work technically. I will gladly guide anyone working on a similar subject, but community involvement is crucial to achieving the goal.”
Regarding its application in modern gadgets, Losu said, “There are some technical issues, which need to be looked into. Forty-four letters in capital and small letters will lead to 88 alphabets. That will require an entirely new keyboard. We have deleted all small letters and it will be used more or less like the Hindi script which does not have small or capital letters, but has tonal markers.”
On the need to develop a script, Losu said, “oral or verbal language doesn’t last for long. Even if we have a strong memory, the language dies with the person. In order to preserve it, we need to start storing it.”
“It is merely the beginning. We have planted the seed and are hopeful that a tree will sprout from our efforts,” he added.