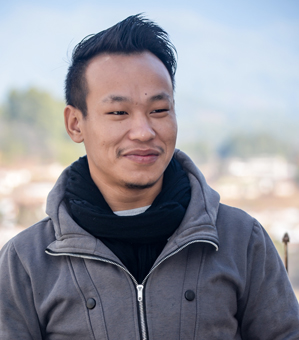 ITANAGAR, Aug 8: After receiving accolades for his role as the antagonist, Kai, in the 2017 movie Orunasol Man, Solomon Sangchoju is set to enter the Malayalam film industry with Bibin Paul Samuel’s directorial debut Aaha – The War Within.
While the Malayalam film industry is largely restricted to south India, it is the fourth largest in the country. The Malayalam film industry focuses more on the story, the script and the technicality involved, and is less star-centric.
Speaking to The Arunachal Times before leaving for his training in Cochin, Sangchoju informed that he would be playing a “parallel lead role” alongside renowned Malayalam actor Indrajith Sukumaran, who would be playing the lead role of a vadam vali (tug-of-war) star.
“The film is a sports drama based on the famous vadam vali team Aaha Neeloor, which has won all of its 73 championships in vadam vali,” said Sangchoju.
The first-look poster of the movie was revealed in mid-July by Malayalam superstar Mohanlal.
On how he landed the role, Sangchoju said, “I started getting a few local offers after Orunasol Man. I was earning decently well tutoring science students, but it was getting tough to make ends meet as an artist. I took a step back to analyze the situation, and started looking for casting calls online. During one such search, I found several casting calls for south movies. I didn’t understand the language, but I applied for all of them anyway. One of them responded, and it was Samuel, the director of Aaha. Samuel has several Malayalam films to his credit as editor.”
Sangchoju attributed his love for acting to his friend and director of Orunasol Man, Nyago Ete. He also spoke about the efforts required in creating a portfolio and video samples to show his work to the makers of Aaha, and acknowledged the efforts of his mentors, Tai Gungte (director of Itanagar 0 Km) and Tai Tugung (actor, Itanagar 0 Km), who helped him through the process.
“The Arunachal Artistes Forum has also been very supportive of my goals. The chairman, Takam Dado Tallom, is always ready to help all artists, including me,” he added.
Besides his performance in Orunasol Man, Sangchoju has worked in eight other short films and a music video. Into the Valley and Man on Scooter, both starring Sangchoju, won the best short film award at the Laissez Faire Film Festival held in Pune (Maharashtra) in 2016 and 2017, respectively.
The actor also likes to work behind the camera, and has written and directed four short films and two music videos. He has also worked as director of photography in five short films, two music videos, and a documentary.
Films written and directed by Sangchoju have also won regional awards.