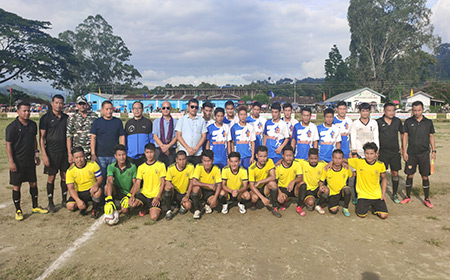 There is no age bar for playing sports: MLA

MIAO, Aug 10: Malusidi FC entered the final of the Independence Day Cup Football Tournament, defeating defending champions Namphai-II United FC-A 3-1 in the first semifinal played here in Changlang district on Saturday.
Pangin MLA Ojing Tasing witnessed the match along with senior public leader of the area, Gumjanong Singpho, Miao ADC Tage Rumi, and SDPO Tashi Darang.
Speaking prior to the start of the match, Tasing said there is no age bar for playing sports. He advised the youths in particular to be “actively involved in sports activities instead of indulging in unproductive activities.”
He also lauded Scorpion Club for organizing the tournament.
The final will be played on 15 August, coinciding with Independence Day.