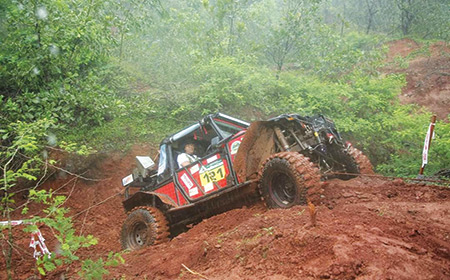 PANAJI, Aug 13: The team of Chow Ujjal Namshum (driver) and Chow Sujeewan Chowtang (co-driver), representing the Manabhum Offroaders Club of Arunachal (MOCA), won the overall third position in the recently concluded Indian chapter of the 6th Rainforest Challenge (RFC), held in Goa from 3 to 10 August.
The team of Namshum and Chowtang also became the second runner-up in the ‘upto 1610 cc petrol or diesel’ category, while MOCA’s Chow Tseng Tsing Mein and co-driver Chow Jenindra Mantaw came in at 15th place.
The MOCA was also awarded the ‘team trophy’ this year.
Earlier, Chowtang substituted for Chow Ingpeng Mein after the latter suffered an ankle injury.
The MOCA had debuted in the RFC India last year, in which Chow Ujjal Namshum had won the ‘rookie of the year’ award.
The winners of the Indian chapter of the RFC of Malaysia this year were Gurmeet Virdi and co-driver Chetan Changappa of the Gerrari Offroaders.
The Gerrari Offroaders also took the second place with the team of Anand V Manjooran and co-driver Vishnu Raj.
Thirty-seven teams participated in this year’s edition of RFC India.
The RFC of Malaysia is considered to be among the top 10 toughest motor races in the world. The Indian edition of the RFC was launched in 2014 by Delhi-based Cougar Motorsport Pvt Ltd.