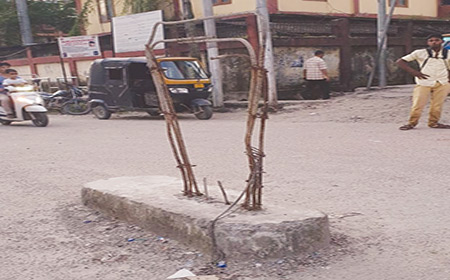 Staff reporter
NAHARLAGUN, Aug 18: The cement street marker containing the name of literary doyen Lummer Dai, near the Tomo Riba Institute of Health & Medical Sciences here, has been damaged.
Capital Complex SP Tumme Amo informed that, according to the Naharlagun SDPO, the slab had been damaged on the night of 22 February by protestors during the anti-PRC riots.
Workers nearby also said the slab had been damaged during the agitation and gradually crumbled.
Meanwhile, the Silukian Welfare Kebang (SWK) has condemned the destruction of the street marker.
Requesting the authorities concerned to ensure early renovation of the damaged marker, the SWK said, “We strongly demand early arrest of all the culprits. This kind of antisocial act should be condemned from all corners. We are deeply saddened by this act. It is utter disrespect to the literary icon and doyen of journalism in Arunachal Pradesh.”