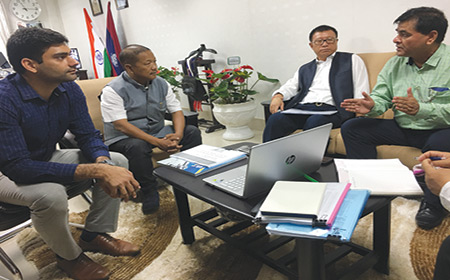 ITANAGAR, Aug 19: Home Minister Bamang Felix urged the National Highways and Infrastructure Development Corporation Limited (NHIDCL) to expedite work on the Joram-Koloriang road.
“Since the monsoon is gradually weakening, primary works like shifting of water supply pipes, electric poles, etc, should be immediately started in order to facilitate smooth construction of the road,” Felix said during a meeting with NHIDCL general manager Prabhakar Kumar here on Monday.
Felix discussed with the NHIDCL official various issues relating to the road, in order to ensure its early construction.
There are 85 electrical poles and 23039 metres of water supply pipelines all along the Joram-Koloriang road, and they need to be shifted immediately to ease the construction work.
This stretch of the road was in the news over the excessive disbursement of compensation, which resulted in an inquiry into the case.
Emphasizing the need for “regular reviews and monitoring to address the issues confronted by the executing agency,” as well for expediting projects across the state, Felix said he would regularly review the progress of the road’s construction.
The NHIDCL official explained the causes of the delay in executing the highway projects in the state, and informed the minister about the progress and future plans regarding the Joram-Koloriang highway project.
The construction of the Joram-Koloriang road is estimated to cost approximately Rs 900 crore.
The foundation stone for this stretch of the road had been laid in December 2018, by union Road, Transport & Highways Minister Nitin Gadkari, in the presence of Chief Minister Pema Khandu.
The NHIDCL official was accompanied by Education Minister Taba Tedir. (HMO)