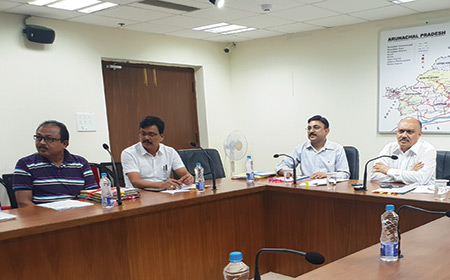 ITANAGAR, Aug 19: The union civil aviation ministry has set 31 March, 2022, as the deadline to complete the Hollongi greenfield airport.
This was announced on Monday by union MoS (Independent) for Civil Aviation Hardeep Singh Puri during a video conference with Arunachal Pradesh Chief Secretary Naresh Kumar here.
Puri reviewed the status of civil aviation in Arunachal, and assured to assist the state in the development of its aviation sector.
The MoS said the much-awaited regional connectivity scheme (RCS), from Tezu to Guwahati (Assam) and Tezu to Jorhat (Assam), will start operating within this year, as licence has already been obtained from the Airports Authority of India for operation of the Tezu airport.
During the video conference, the CS raised the issue of infrastructure development at the selected RCS helipads in Naharlagun, Tuting, Walong, Daporijo and Yingkiong.
Stressing on the significance of infrastructure development at the Tawang helipad, Kumar suggested exploring the possibility of establishing air connectivity between India and Bhutan via the Tawang helipad.
Civil Aviation Secretary SK Jain was also present at the conference. (CSO)