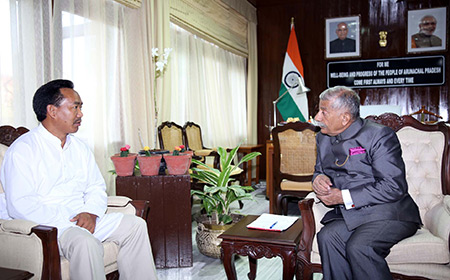 ITANAGAR, Aug 21: Rural Works Department Minister Honchun Ngandam called on Governor BD Mishra at the Raj Bhavan here on Wednesday and apprised him regarding the much-needed construction of the road from Miao to Vijoynagar in Changlang district.
They discussed the national importance of the road and also the road importance for the people located in the far-flung areas on the international border of India and Myanmar and gave emphasis on speedy construction of the Miao-Vijoynagar road as per the stipulated specifications and its early completion, preferably by the end of the current financial year.
They noted that with the construction of this road there will also be substantial care and improvement of flora and fauna in the Namdapha National Park, besides effective surveillance and control on poaching activity, if any, in the area.
They also opined that the safe animal passages and corridors for the free movement of animals within the park should be fully protected.
It was also highlighted during discussion that the road between Miao and Vijoynagar has been in existence for a very long time. It was used for vehicular traffic as early as in 1975 by the then Lieutenant Governor KAA Raja, but over a period of time, due to non maintenance of the road, it has become unusable and at many places the road has been washed away. This, in the public interest and in the wider interest of the national security, calls for a well thought out plan for reconstruction in keeping with the existing provisions of various rules, regulations, Acts and bye laws on the subject. (PRO to Raj Bhavan)