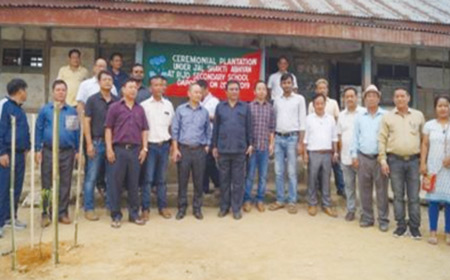 DAPORIJO, Aug 21: A team of central government officers, headed by Additional Secretary of the Union WCD Ministry, K Moses Chalai under ‘Jal Shakti Abhiyan’, along with concerned state government officers of line departments visited the dam constructed by the WRD and a community farm pond in Ligu village in Upper Subansiri district on 19 August.
The team also visited Sippi, Lida and Dumporijo villages
to see various community farm ponds and tea plantations.
The central team include Ministry of Youth Affairs Deputy Secretary Sunil Garg and three scientists. This was the second visit to the state in connection to Jal Shakti Abhiyan.
During the coordination meeting held in the evening with all the BDOs and officials from various line departments, Chalai reviewed the progress and implementation of various programmes by respective departments in block levels for conservation and sustainable management of water in Upper Subansiri district.
He also interacted with the gaon burahs (GB) of Hankar village and highlighted the role and importance of GBs in water conservation for future generations.
APO(M) cum District Nodal Officer Margo Hai gave a power-point presentation on the programmes being implemented in the district in connection with water conservation.
The second day programme began with awareness rally on water conservation at Town Middle School, Daporijo. This was followed by visit of rain water harvesting structure constructed under the guidance of PHED department in DST Colony and tree plantation under Jal Shakti Abhiyan by the Forest department in Rijo Secondary School, Daporijo.
Later, Chalai along with Garg and Hai visited water-stressed villages like Dula, Hokom and Tasidoni and inspected the water tanks constructed over water streams for supply to the portion of Dula village. (DIPRO)