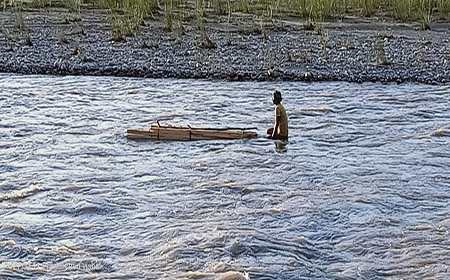 [ Amar Sangno ]
ITANAGAR, Aug 21: A nexus between timber mafias and locals, including hornbill conservators, has surfaced, wherein they have been found to be involved in rampant illegal timber logging under the Pakke Tiger Reserve (Papum Reserve Forest) in the newly created Pakke Kessang district.
Photographic and video evidence of logs being transported through the Pakke River to neighbouring Assam also came to the fore this week.
On being contacted, Divisional Forest Officer VK Jawal said that he is “not aware of the latest development.” However, the forest officer said he would send a patrol team for checks.
The total area of the Papum Reserve Forest is 1063 square kilometers and the entire area falls under Pakke-Kessang district.
Sources claimed that locals,including Forest department officials (also locals), teachers, hornbill conservators and gaon burahs are involved in the illegal logging.
It is said that timber is the only means of earning at Seijosa area for most of the residents. Reportedly, locals who engage labourers in the rampant operation are self-declared owners of the reserve forest.
“It is an open fact that the locals are involved in large scale illegal logging under the reserve forest area. The authority is silent despite knowing everything,” said a Forest department employee.
The Forest department also said that unabated timber operation is difficult to check due to lack of manpower.
Earlier, one Pahi Tachang, former chairman of the Gora Abhe Society (GAS), a Seijosa-based hornbill conservator NGO, was allegedly involved in illegal timber logging.
Following the allegations, the conservationist group had terminated him from the society.
There are also reports of the current GAS chairman Takam Nabum’s relatives’ involvement in similar illegal timber logging.
However, when contacted by The Arunachal Times, Takam Nabum denied the allegation.
Sources claimed that the timber smugglers earlier transported the newly sawed logs through the 3rd IRBN camp route at Munia, (Seijosa) to neighbouring Assam, which is a stone’s throw away.
“Earlier, they used to transport via the 3rd IRBN Camp at Munia to neighbouring Assam.Once they were inside Assam, we had no jurisdiction to act against them,” said a police officer who did not wish to be named.
“They have found a new way of transporting the logs using the Pakke River and it is difficult to spot during the night,” he added.
Reportedly, the timber smugglers take undue advantage of insurgency apprehension among locals and rampantly operate in the area, which is a grave threat to forest resources and wildlife.
Earlier this year, the National Green Tribunal (NGT) had sought a detailed report from the Bhalukpong (West Kameng) divisional forest officer (DFO) on illegal logging and timber operations in the Papum Reserve Forest.
The environmental watchdog had earlier heard a public interest litigation (PIL) filed by a Seijosa (Pakke-Kessang)-based environmental activist, Jorjo Tana Tara, on 9 April.
The Supreme Court had imposed ban on felling of trees in any state without prior permission from the union government on 12 December, 1996, a year after TN Godavarman Thirumulpad filed a petition.