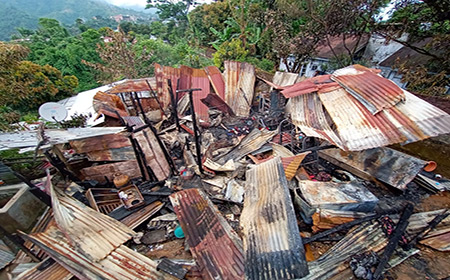 ITANAGAR, Aug 23: An OBT house near Bungalow No 10 in Niti Vihar here, belonging to one Dilip Sharma, was burned to the ground in a fire accident that occurred on Friday morning.
The incident took place at around 11 am, and not a single item could be saved from the fire. The lack of a passage prevented the fire tender from reaching the incident site. The flames were finally doused by the residents of the area.
In December 2017, a major fire had devastated the same colony, burning down 15 houses.
Saying that the lack of a passage becomes a major issue during such incidents, the residents have urged the authorities to look into the matter.