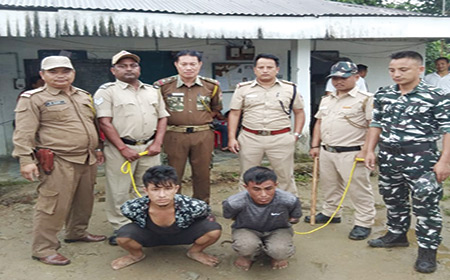 [ Taba Ajum ]
ITANAGAR, Aug 23: The police in Lower Siang HQ Likabali have arrested two persons in connection with the murder of a 70-year-old woman.
The duo is also accused of intruding into the girls’ hostel of the government higher secondary school in Likabali and stealing a mobile phone.
The Likabali police informed that a complaint had been received at the police station on 17 August, alleging that some persons forcibly entered the girls’ hostel and fled with a mobile phone. A case (No 24/19 u/s 457/380 IPC) was registered in this regard.
However, the stolen phone was still active, and when the owner called, the person using it started to threaten her.
Even as the police were engaged in solving the case, on 19 August the body of an old widow was found inside her house in Upper Colony of Likabali under mysterious circumstances. The old woman had reportedly been living alone.
A case (No 25/19 u/s 302 IPC) was registered against unknown persons, and investigation was taken up by SI T Kaye, under the supervision of SP Surender Choudhary and Likabali PS OC Inspector Tumke Angu.
During the course of the investigation of the murder case, an inquest was conducted in the presence a team of doctors and police. An FSL team from the Banderdewa-based Police Training Centre arrived at the scene of the crime and collected footprints and fingerprints of the unknown accused persons.
With the help of the footprints, and the call detail report and the voice recording from the earlier case, the police zeroed in on one Kenbom, who is alleged to be a habitual offender.
The police arrested Kenbom from Likabali on Wednesday. During interrogation he admitted his involvement in the crimes, and also revealed the name of his co-accused. Based on his statement, a joint team of Assam Police and Arunachal Pradesh Police arrested one Nilakanta from Assam in the wee hours of Friday.
A Panasonic LED TV and a set-top box which had been stolen from the house of the murdered old woman were recovered from his possession.
The Likabali police said both the accused have confessed to their involvement in both the crimes. The police said further interrogation is underway to recover other stolen properties, and to find out the duo’s involvement in other cases.
The Likabali police have thanked two civilians and the police team from Silapathar (Assam) for their active cooperation in arresting the accused.