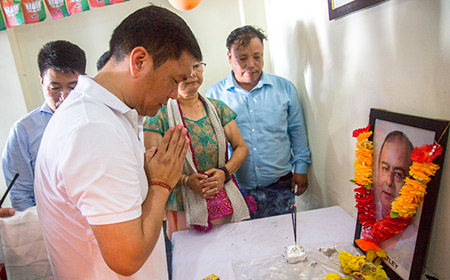 ITANAGAR, Aug 25: Chief Minister Pema Khandu paid floral tribute to former union minister Arun Jaitley’s portrait during a ‘shraddhanjali samaroh’ organised by the state BJP at its party office here on Sunday.
The CM and party workers also observed a two-minute silence as a mark of respect to the departed soul.
Khandu recalled Jaitley as an outstanding parliamentarian and a legal luminary “who always fought for eradication of corruption.”
The chief minister also expressed appreciation for Jaitley for bringing major financial reforms, such as the GST, the Jan Dhan Yojana, and demonetization.
He said he had personally met Jaitley on several occasions, and that Jaitley “was always encouraging towards Arunachal becoming economically self-sufficient.”
“Following his direction, we have been trying to make Arunachal a self-sustainable state,” Khandu said.
The BJP’s West Kameng district unit also mourned the demise of the former union finance minister.
The Arunachal Pradesh Congress Committee (APCC) has also mourned Jaitley’s untimely demise.
On behalf of the rank and file of the state Congress, APCC general secretary Charu Taya offered sincere condolences to the bereaved family, and said “his (Jaitley) demise has created a void and his absence will always be felt.” (With CMO input)