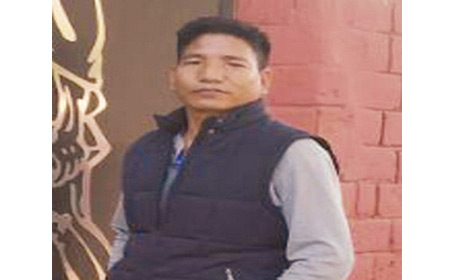 [ Karyir Riba ]
ROING, Aug 25: Toni Pertin, the vice principal of the government higher secondary school in Dambuk in Lower Dibang Valley (LDV) district, has been selected by the union HRD ministry’s school education and literacy department for the prestigious National Award to Teachers.
Pertin will receive the award, along with a certificate of merit, a silver medal, and a cash award of Rs 50,000, on 5 September, on the occasion of Teachers’ Day, in New Delhi.
This is not the first time that Pertin has been selected for an award. During his time as the headmaster of the government secondary school in Parbuk, the school had been awarded for being the best school in LDV in the 2015-16 session. The award included a cash prize of Rs 1 lakh from the state government, which Pertin utilized in renovating the teachers’ common room, painting the school building, and setting up signboards with motivational slogans in the school’s premises.
During the same academic year, the school also received the ‘sabse swachh vidyalaya’ award from the district administration.
Pertin also received a certificate of appreciation from the LDV administration for ‘academic excellence and discipline’ during his tenure as the headmaster of the Parbuk GSS.