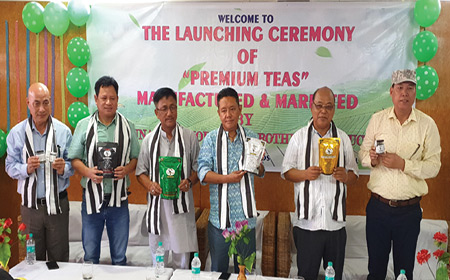 ITANAGAR, Aug 25: Legislative Assembly Speaker PD Sona on Sunday advocated involving more local youths in the tea industry in order to create self-employment avenues and boost the state’s economy.
Attending the launch of Premium Teas, manufactured and marketed by the Arunachal Hornbill Brother Products, at a city hotel here, Sona said, “It is an encouragement to the younger generation who do not wait for or want government services.”
Stressing on promotion of tea products, the speaker also said the people associated with tea production must have skill and knowledge.
“Promotion of such tea brands will also bring good name for the state,” Sona said, and urged the promoter of Premium Teas, former MLA Techi Hemu, to promote the venture with zeal as “it would inspire the local youths to be involved in tea production for sustainable development.”
Industries Minister Tumke Bagra, who along with Agriculture Minister Tage Taki was also present at the launch, asked the promoter to “maintain the quality of products to capture the market in the state.”
Taki in his address said several tea gardens have come up in the state “and thousands of people are associated with the tea industry, right from cultivation to packaging and marketing.”
Pakke-Kessang MLA Biyuram Wahge expressed hope that the involvement of Hemu in the tea industry would “encourage and inspire more youths of the state to get involved in tea cultivation.”
Hemu gave an overview of several tea brands, besides speaking on quality and the packaging process.
He said the foothills of Arunachal are suitable for tea cultivation, and expressed hope that the Premium Teas brand would “earn name and fame not only in our state but also in other parts of the country.”