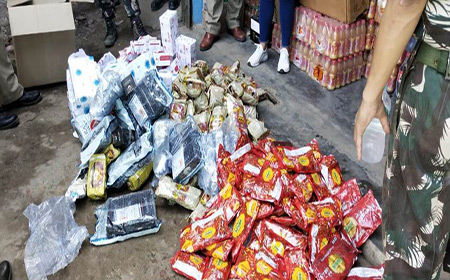 ROING, Aug 26: A team comprising officials of the administration, the health department and the police, led by Executive Magistrate Hage Atho, seized cigarettes, gutkha, and loose tobacco leaves from 15 shopkeepers here in Lower Dibang Valley district during raids conducted on Monday.
The raids were conducted as part of the first phase of implementation of the Cigarettes and Other Tobacco Products Act (COTPA) to check the sale of tobacco products without pictorial and warning messages on their covers.
In West Siang district also, a large quantity of tobacco products which were being sold from various shops in Aalo in contravention of the COTPA were seized during raids conducted by flying squads on Monday.
The raids were mainly confined to shops falling within a radius of 100 yards from schools and colleges.
DSP S Thinley, Tax & Excise Inspector D Ango and Aalo East BEO Bamin Loyi led the raids.
They were assisted by activists from NGO Mothers’ Vision, Galo Ane and the BWS. (DIPROs)