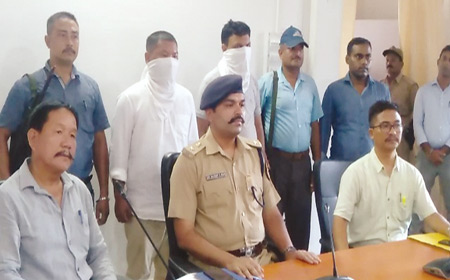 Staff Reporter
Itanagar, Aug 26: In a major breakthrough, a special investigation team (SIT) of the state police arrested a self-styled major of the NSCN (R), Phangran Jugli, and a businessman, Manoj Kr Mittal, from Nyorch in Papum Pare district on Sunday.
Addressing a press briefing at the police headquarters, SIT SP Navdeep Singh Brar informed that the arrests came about following receipt of information about NSCN (R) members indulging in extortion in the capital complex and moving about in a white Scorpio (AR01-L-2202).
An SIT team, comprising Inspectors N Lali and T Bage and led by Brar himself, raided various suspected locations in Naharlagun and Itanagar.
“During the raids, the NSCN (R)’s commander of Changlang region, SS major Phangran Jugli, a native of Rangran village in Changlang district, along with Manoj Kumar Mittal, a native of Margherita, Assam, was apprehended,” said the SP.
“Apart from carrying out extortion, they had come here to buy land for establishing a hideout in the capital region, and Jugli was Mittal’s contact for identifying land and brokers,” Brar said.
A case (CB-PS FIR No 07/2019/384/511, r/w 34 IPC) has been registered in the matter.
Brar said investigation revealed that Jugli is wanted in five cases in Changlang district.
“With this arrest, the APP has foiled the conspiracy of the NSCN (R) to commit extortion activities in the capital complex. The matter is under investigation to unearth the details,” the SP said.
He requested the residents of the capital region, particularly landlords, to ascertain the backgrounds of tenants and buyers, “following the legal channel,” so that unknown, suspect persons can be identified by the law enforcement agencies.