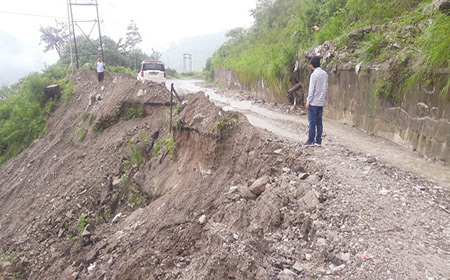 Staff Reporter
ITANAGAR, Aug 28: The pathetic condition of the Yupia-Potin-Ziro road has made life miserable for commuters, with the recent monsoon rain further deteriorating this stretch of road.
Even though the road is in a horrific condition, the Public Works Department (Highway) has been unable to repair it, which continues to aggravate the resentment in citizens.
The said road is the lifeline for the people of Lower Subansiri, Kurung Kumey, Kamle, Kra Daadi and Upper Subansiri districts. The stretch from Papu-Yupia to Potin was constructed under the Trans-Arunachal Highway (TAH) but the condition has worsened in the last few years.
On the other hand, the stretch from Potin to Ziro was caught in the multi-crore land compensation controversy.
Considering the appalling condition of the road, the state government had kept Rs 60 crore for its maintenance. However, it is reported that the PWD Highway managed to use only 50 percent of the total sanctioned amount and failed to spend the remaining fund.
Locals alleged that the condition of road has not improved “even after the maintenance work was carried out.”
When contacted, a PWD Highway official said, “50 percent fund is available and the PWD Highway Doimukh division is looking after it.”
For the Potin to Bopi stretch the department has already floated tender.
“This time we have divided it into nine packages for better execution. Earlier, it was divided into three packages and tender was floated, but not a single bidder turned up,” the official added.
Further, ministers Tage Taki and Taba Tedir, who are local MLAs of Ziro and Yachuli   assembly constituencies under Lower Subansiri district, respectively, have also raised concern over the poor condition of the Yupia-Potin-Ziro road with the PWD Highway.
The All Lower Subansiri District Students Union had also written to the state’s chief secretary, appealing for maintenance of the Potin to Ziro section of TAH, besides seeking early start of Potin-Panggin TAH work.
The union also sought stringent action against all the fake beneficiaries of the land compensation and erring officers who were responsible in creating bottlenecks in construction of the TAH.
Additionally, the union in a communiqué has also threatened to launch an agitation if the maintenance of the Potin-Ziro is not carried out within the next two weeks.