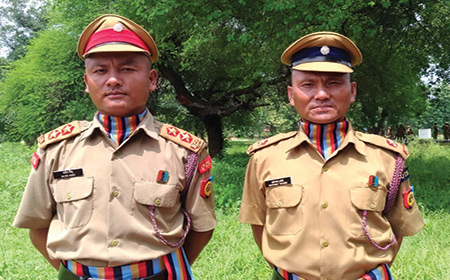 TEZU, Aug 31: Lieutenant Rajen Miwu and 3rd Officer Bafemso Tayang of Arunachal Pradesh are among the 446 officer cadets who have been inducted into the National Cadet Corps (NCC) as associate officers after the completion of their three-month training at the NCC Officers Training Academy in Kamptee, Maharashtra.
The passing out parade held on Saturday was reviewed by the NCC’s Additional Director General of the Delhi Directorate, Lt Gen Ajay Seth.
The officer cadets earlier underwent three months of rigorous training, which included yoga, drills, leadership training and personality development.
Lt Miwu is an assistant professor at the Indira Gandhi Government College in Lohit HQ Tezu, and Tayang is a junior teacher at the government higher secondary school in Hayuliang in Anjaw district.