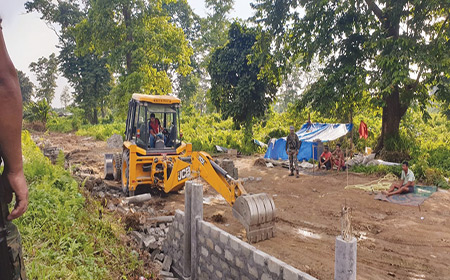 [ Amar Sangno ]
ITANAGAR, Sep 1: Ejo Loliang (name changed), a man in his 50s, grew up seeing Tezu township – the erstwhile Tezu station reserved forest area – undergo tremendous transformation, from being a lush green forest to being punctuated by haphazardly constructed boundary walls and buildings.
Sources informed The Arunachal Times that numerous boundary walls and structures are coming up rapidly, squeezing the strategic road between Tezu township and Shivaji Nagar.
“The worst area is between the LP land trijunction and Shivaji Nagar. The walls have made the road so narrow that heavy vehicles like Army convoy trucks are facing difficulties in plying on the road,” said Loliang.
Another source informed that rampant encroachment and rapid construction of structures are occurring for the purpose of claiming compensation, in the wake of rumours that a railway alignment would pass through the area.
Despite repeated queries made via WhatsApp by The Arunachal Times, Divisional Forest Officer S Manyu chose not to comment much on the development, except to say that the area falls under the district administration’s jurisdiction.
After the matter of illegal construction of structures came to light, Lohit Deputy Commissioner Prince Dhawan issued an eviction order and carried out an eviction drive on Tuesday, but it could manage to cover only a 100-metre area. The haphazard structures stretch upto 5-6 kilometres between the LP land trijunction and Shivaji Nagar.
It is learnt that Additional Commissioner Sunny Singh had to face stiff resistance from the encroachers. An unconfirmed report said a woman attempted to kill herself when the administration was dismantling the illegal structures.
Ironically, the encroachers have not even spared the premises of the official residence of the chief conservator of forests. However, no action has reportedly been initiated.
On being asked by this daily, the principal chief conservator of forests said he would seek a report from his officer on the issue before taking necessary action.
“Rampant encroachment is happening in Tezu town, including the reserved forest area, due to the lack of a cadastral map,” said a resident who preferred not to be named.
It is learnt that fund had been allocated in 2013 to conduct a survey to prepare a cadastral map, but it was not implemented.
“The public is taking advantage of the weak administration and resorting to land-grabbing,” said the resident.
He suggested that a flying squad, comprising local residents, officials from the administration and the forest department, and police personnel should be constituted to monitor the development in the controversial areas.
“The administration should seek reports on a weekly basis about illegal structures, so that building of structures can be checked,” he added.
In October 2017, the then Lohit DC, Karma Leki, had issued a notice directing the executive engineers of the PHE&WS department and the Tezu/Namsai power (electrical) department to ensure that the residents of the area had proper land allotment and NOCs from the district administration prior to providing water supply and electricity connection in those areas.
The open encroachment has already stalled the setting up of the proposed AYUSH medical college there.
It is understood that during the 2011 socioeconomic census, the settlers in the area – mostly non-APSTs – misled the enumerators by addressing the township extension area as Shivaji Nagar, whereas the original Shivaji Nagar is in the 43 Mile area.
The conflict between the people and the forest department has been prevailing ever since the department started demarcating land and declaring reserved forest areas in Arunachal Pradesh. The urbanization of human settlements makes the scale of the conflict greater, as many reserved forests are being illegally encroached on by the people for livelihood.
Such cases have also been reported in Banderdewa in Papum Pare and Bhalukpong in West Kameng district.