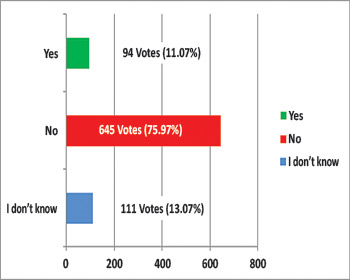 1. We are still waiting and noticing.
2. It is still the same old method to fool our common people.

3. The government has failed each and every individual of the state. Despite there being BJP government at the Centre and in the state, they have failed to provide even basic services to the people. They are only busy promoting Hindi language, RSS programmes and meaningless Hindutva propaganda. I can only hope that some common sense may prevail in the government.
4. You guys are asking for annual report card even before the half yearly exams! Please, let the government work peacefully now. After so much of political drama in the last five years, we finally have a stable government, and Team Khandu looks promising. Hopefully, they won’t let our aspirations down and will keep their promises.
5. Its only three months since the government formation.
6. The first step for development is not necessarily to build new buildings and new roads. At least provide us with high-speed internet.
7. It has been just a few months. Ask this question after two years, when it becomes relevant.
8. The society in which we live is a blind and mute spectator only because of appeasement politics. Appeasement politics is the mother of corruption; corruption is the mother of unemployment; unemployment is the mother of terrorism; and TK is the mother of all the dust storm in our twin capital.
9. It seems everyone is keeping mum only to cover their mouth and nose to protect themselves from it and thus forgot to remove their hands to raise questions against the burning issue and the state government with its stringent deadline warning till September is like, “Wake me up when September ends.”
10. Both the state and central governments are masters in lying with assurance for better development activities. But in reality zero result compared to the Congress government. Our GDP is continuously falling; the value of the Indian currency falls, unemployment problem rises day by day.
11. All officiating and functional officers/ officials to be terminated have not been implemented till now and again fresh appointments are given in the engineering departments. DPC after every six months not yet implemented. Also, winding up of engineering in non-technical departments has not yet been implemented.
12. That was just a promise made to be broken. Forget about promise, our politicians don’t even pay heed to the oath he/she has taken.