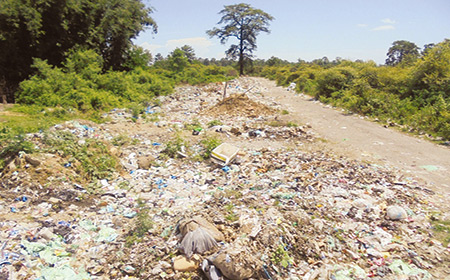 [ Prafulla Kaman ]
PASIGHAT, Sep 2: The burial-cum-cremation ground near the advanced landing ground here in East Siang district has turned into a site for dumping garbage by the municipality, posing health hazard to nearby dwellers.
The Pasighat Municipal Council (PMC) has allegedly been dumping waste on the burial ground since 2016, despite objections from the locals and complaints made to the district administration.
“The PMC has been dumping garbage on the burial ground since 2016, which has turned the human habitation under Ward 10 into a
health hazard zone,” said Baang Mize, a resident of Jarku in Pasighat urban area.
“Despite our objection, the PMC authority is continuing with the unhealthy practice,” Mize said, adding that the residents’ pleas to the PMC to find another place for the purpose have fallen on deaf ears.
Former ward secretary Nong Doming said the local MLA, the former deputy commissioner and PMC officials had visited the burial ground a couple of months ago and assured to address the problem at the earliest.
“But no initiative has been taken so far from their ends in this regard,” Doming rued.
Stating that the PMC’s activity amounted to violation of the right to live in a clean and healthy environment, the residents of Jarku said they have decided to seek the National Human Rights Commission’s intervention in the matter.
The locals are also raising questions over the utilization of the fund meant for developing the burial ground.
The burial-cum-crematory ground, located on the right bank of the Siang river, was developed with fund from the central government in 2009. Around Rs 274 crore was earmarked for phase-wise improvement of the burial ground’s infrastructure.