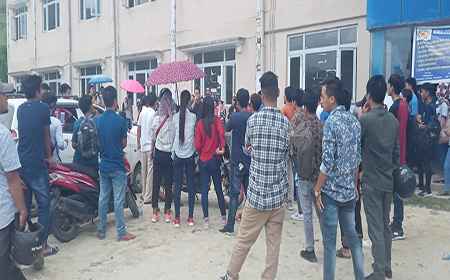 Staff Reporter
ITANAGAR, Sep 2: The students of Himalayan University (HU) here staged a protest in the university campus on Monday, seeking clarification from the university authorities in the wake of the sting operation carried out by CNN-News18 channel which claimed that the university was selling degrees to students without them having to attend classes.
The students here submitted a six-point memorandum to the university’s authorities, demanding, inter alia, a clarification over the channel’s allegation, a meeting with the HU chairman, the complete record of the students since the day the university started operating, and closing the university’s Delhi office.
Speaking to the media, HU Students’ Union president Giogi Tania said the students are worried about their future and therefore held the protest to seek clarification from the university authorities.
“We have placed our demands and are very clear about it. We want to ensure that everything is transparent. The university authorities should take steps to check this kind of illegal activity, and also clarify on the demands placed by us,” he said.
Later, HU registrar Dr Vivek Mittal told media persons that the university has accepted most of the demands placed by the students.
“Our chairman is coming to the university next week, as demanded by the students, to address their concerns. We are also ready to issue the list of all students who have passed from the university in the past,” he said.
Regarding the allegation of selling of degrees, Dr Mittal claimed that HU had no relation with the person shown in the sting operation.
“We make it very clear that HU has no connection with this person. In fact, we have lodged police complaints in Itanagar and Delhi against him. We are pressing the authorities to take strict action against this person,” he said.
The registrar also claimed that an attempt was being made to harm the image of HU.
“We are the largest private university in the whole of Arunachal Pradesh. We have invested heavily in creating infrastructure. Thousands of students study in our university, and every year thousands of them pass out. All the degrees are authentically issued by the university, and our students who are currently working in various parts of the country will vouch for it,” the registrar added.