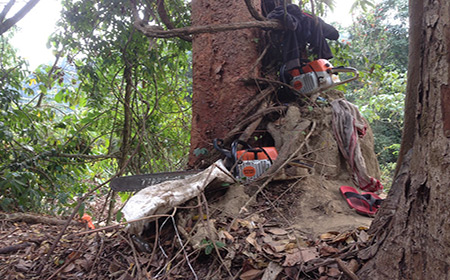 [ Tongam Rina ]
ITANAGAR, Sep 2: The National Green Tribunal (NGT) has directed the Arunachal Pradesh government to take appropriate action to stop illegal logging in the state.
The direction came after the tribunal heard a case of illegal logging being carried out in Papum forest under the Khellong forest division, filed by Jorjo Tana Tara, a resident of Seijosa in Pakke-Kessang district.

Stating that there are serious environmental questions in the case, the NGT has directed the state to take appropriate action to identify the “hotspots” where illegal felling of trees and deforestation are taking place. The NGT has directed the government to constitute a high-level committee headed by the chief secretary to put into action the direction of the tribunal, and to ensure that the committee meets within a month.
The tribunal consists of Justice SP Wangdi and expert member Dr Satyawan Singh Garbyal, and the respondents are the Arunachal Pradesh government, the principal chief conservator of forests, the additional principal chief conservator of forests, the Khellong division DFO, and the National Tiger Conservation Authority.
The NGT further said that the strength of the forest personnel at all levels should be enhanced, considering the size of the huge tract of forest land that plays the role of a carbon sink and is considered the lungs of the country. It also called for ensuring effective enforcement of the forest laws, and protection of the rich forest resources.
Tara had gone to the NGT in April this year, seeking an end to the indiscriminate logging inside the Papum reserved forest, adjacent to the Pakke Tiger Reserve (PTR) in Pakke-Kessang.
As reported earlier by this daily, there has been large-scale logging activities inside the Papum reserved forest for the last couple of years, which forced Tara to seek the intervention of the NGT, after his complaints to the local forest authorities did not yield effective results.

Dept admits to logging inside reserved forest
After receiving Tara’s petition, the NGT had sought a report from the Khellong forest division DFO and the PTR director. In their report to the tribunal, they admitted that illicit felling of trees was continuing in the Khellong forest division “but not to the extent as has been projected.”
Based on the report of the forest officers, the NGT said regular patrolling is being carried out in the area by the Seijosa forest range officer, along with a mobile squad, the Special Tiger Protection Force and police personnel, “because of which illegal felling has been controlled to a large extent.”
However, those on the field say that some facts may have been omitted in the report submitted to the NGT as trucks carrying logs ply on the road just near the Lower Seijosa forest check gate, reflecting the inability and reluctance of the forest department to control illegal logging. If the forest department is not involved, it should have taken strong steps to stop logging, they said.
Tara had earlier written to the forest department to install a CCTV camera at the Lower Seijosa forest check gate, by way of which logs are transported.
“It has stopped working,” he said.
Illegally felled logs are also transported through the Pakke river.
The NGT has taken note of the limited staff in the range office which has made it difficult to effectively deal with illegal logging.
The tribunal said there are “the mafia and miscreants involved in the illegal timber trade.”
Tara agreed with the NGT that there is an Assam-based timber mafia operating in the area with the help of locals. He, however, said the report that had been sent to the NGT did not reflect the whole truth.
“There are many forest ranges under the Khellong division. If they work together, it can be stopped,” he said.

Chainsaws from Assam used for illegal timber ops
The NGT further said that chainsaws which are being used for illegal timber felling “have been identified as the principal menace, and the porous interstate Assam-Arunachal boundary in the southern boundary of the Seijosa forest range jurisdiction facilitates miscreants from the other side of the boundary to indulge in illegal felling and removal of timber.”
Tara said though the locals are involved in illegal felling of trees, they do so in connivance with the timber mafia and sawmill owners from Assam, as the locals do not own chainsaws.

Tara’s lone battle against illegal logging
Jorjo Tana Tara, who has been fighting a lone battle to control illegal logging, said the NGT verdict is important as it does not confine itself to the Papum reserved forest alone.
“The state government has been asked to stop illegal logging in the entire state, and I hope that something will come up,” he said, speaking to The Arunachal Times from near the Pakke river. He was waiting near the river as he had been tipped off by the locals about logging on Monday.
“I request everyone in the foothill areas across the state, where logging is occurring the most, to work together, so that we can save our forests,” he said.

2004 floods that destroyed agriculture land
The flood of 2004 devastated Seijosa area near the Papum reserved forest, where many people lost their agriculture and horticulture land.
Tara said logging would stop only if there are alternative livelihood options, as many have lost their cultivable land.
“In the absence of other livelihood options, I don’t see how logging is going to end,” he said.
However, he added that unless the forest department is really keen, logging will not stop. He expressed hope that the state government would take it up with Assam to stop logging, as suggested by the NGT.

Threats from timber mafia
The NGT said the range officer was threatened by “the mafia and the miscreants involved in the illegal timber trade,” which had led him to request for police protection in 2014.
Most of those who log inside the Papum reserved forest are armed, making it impossible for the local villagers to speak out as to who the partners in the operation are. The fact that those who are logging are armed reflects how serious the logging business is.
“Many are surrendered militants,” said a local who did not wish to be named.
He said logging for local use, like construction of homes, is normal and acceptable, but what is worrying is truckloads of logs going out of the reserve forest, making it clear that the forest department is either not bothered or scared of the mafia.
There is also apprehension among the locals that some of the forest officials might be indirectly involved in the logging activities.
Meanwhile, the NGT said urgent steps are required to “conserve and further nurture the natural setting of the state.”
“The rapid degradation of the forests requires to be arrested, considering its immense role in carbon sequestration. Conservation of the forest areas would not just be protection of the trees and the greenery but also the rich biological diversity, wildlife habitats, and the entire ecology which has evolved over the centuries that sustain varied flora and fauna and wildlife, including the numerous tribal communities inhabiting the areas.
“There is no gainsaying that the state is the trustee of its natural resources and in that capacity, it is expected to discharge the responsibility which the constitution of India has reposed upon it under Article 48 (A),” Justice Wangdi and Dr Garbyal said.