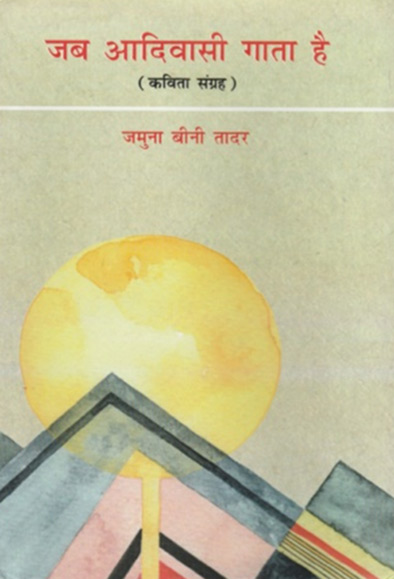 In the words of the great romantic, PB Shelley, “Poets are not only the authors of language and of music… they are the unacknowledged legislators of the world” and have the power to transform society. A poet, thus, imitates reality to teach and delight. The poet has the power to communicate to his reader to move and change lives.
The same spirit has been conveyed by Dr Jamuna Bini Tadar in her anthology of poetry, Jab Adivasi Gata Hai. She unfurls the failing virtue of tribal ethos and tries to awaken the defending concern of native souls. She is a keen observer of the society in which she lives, and its influence can be seen in her creation. She bewails the fading imprint of the native mores under the influence of modernization, and thereby arrests the conscience of the reader to reflect on the message contained in it.
The anthology has 37 poems kneaded with a fine mix of innocence and experience. It is a dirge expressing the poet’s agony at being trapped in the vortex of modernity and globalization. Every flip is a display of wrestling issues of society, such as poverty, corrupting, effect of civilization, drifting culture, and women’s liberation. In the backdrop, nature holds the centre-stage throughout the poem.
The anthology showcases the poet’s concern over the ailments of modern culture. She finds solace in the old way of life. Woh Alsayeh Din (Those Idle Days), Dehaat Ki Yaad (Reminiscence of Country Life) and Laut Aao (Come Back) are expressions of the poet’s intense bucolic nostalgia for the innocent ambience of country life. She finds simple joy and rapture in rustic life. She writes, Ghar ke bhag seh hi daadi ka tambuk mehekta/Bithar angethiya mein/ Roshni jal-jalakar nachti/Yeh namda hai humara/Yani gao ka sabse bara ghar (The fumes of granny’s tobacco in the air of the courtyard; inside, roaring fire dancing in the hearth. This is my namda – the biggest house of the village).
Amidst the sullied and tarnished bounty of modernization, that is crushing the established equilibrium. The poet tries to instill hope by singing in a positive note, Tumhare log/Tumhare baad bhi jiyenge/Sansar ko batlana/Adivasi sanskriti ke bare mein (Your people will live after you to tell the world about the tribal culture).
Philip Sidney in An Apology for Poetry remarks that poetry is capable of making the unpleasant, like war and horror, pleasant in terms of the means through which it is presented. In a similar light, with sweetly uttered knowledge, Dr Tadar has made the dirge so pleasing to the ear that even an unscholarly mind would be drawn by its sweet expression.
The poems vary in length and do not follow any conventional form. The verse, strewn with simplicity, makes it an effortless read. It seems the poet has intentionally chosen an unsophisticated style by keeping the taste of the millennial audience in mind. (The contributor is from the Department of Education, Rajiv Gandhi University)