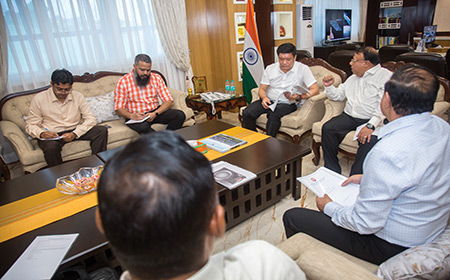 ITANAGAR, Sep 4: Chief Minister Pema Khandu took a review of all the railway projects in Arunachal with the officials from the Northeastern Frontier Railway (construction) here on Wednesday.
During the meeting with NF Railway (Construction) General Manager NK Prasad, the chief minister held discussion on construction of Murkongselek to Pasighat railway line. He assured all cooperation of state government in expediting the project.
During the review on status of several ambitious railway projects proposed in the state, it came to light that the ‘190km Bhalukpong-Tawang railway line will involve 177km of tunneling. Estimated to be completed in 10 years, survey works involving marking of alignment, soil inspection etc has been completed and DPR will soon be prepared.’
The chief minister also enquired on other railway projects such as the Pasighat-Tezu, Bame-Aalo, and all other projects proposed in the foothill areas of the state.
Khandu further discussed on the scope to help farmers export their produce by railway expanding its role for transportation of perishable cargo items. He also sought status on satisfaction level of customers on rail service from Naharlagun to Guwahati and Tinsukia.
The chief minister urged the railway officials to maintain customer satisfaction level and to impose ban on use of non-biodegradable products. He suggested the railways maintain utmost hygiene and to use perishable items like bamboo products. (CMO)