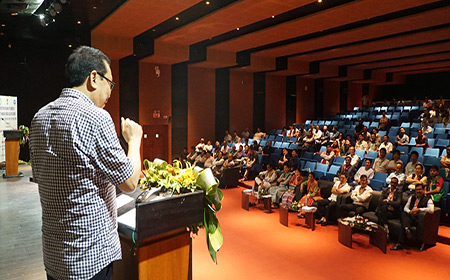 ITANAGAR, Sep 6: “If there is any one institution in a parliamentary democracy that is answerable and accountable to the people, it is the legislature,” said Deputy Chief Minister Chowna Mein at the valedictory function of the two-day orientation programme for the members of the 7th legislative assembly here on Friday.
“It is my earnest desire that the Arunachal Pradesh legislative assembly becomes a model for all legislative assemblies in the country,” Mein said, and urged the members to work in ways that enhance the prestige of the legislature.
“We represent more than 13 lakh people, so we have a great responsibility in ful- filling their aspirations. Let us be careful in our speeches and actions,” he said.
The DCM stressed on the need for the legislators to be aware of their roles and responsibilities, the legislative and budgetary processes, parliamentary customs and conventions, and etiquette, among other things.
He urged the new legislators and the three women legislators to actively take part in debates and offer their ideas and suggestions to make the lawmaking process meaningful.
“Let us study the rules and traditions and use all the resources available in the assembly to become an effective and ideal legislature,” Mein said.
He appealed to the legislators to raise issues which concern the state the most, and also to hold deliberations on curbing the menace of drug abuse among the youths.
The DCM further advised the younger legislators to make use of social media in order to get their ideas across to the young generation and create awareness about the government’s policies, programmes and achievements.
He assured the speaker that fund for development of e-Vidhan would be placed soon in the assembly, in order to make the assembly become fully paperless.
Legislative Assembly Speaker PD Sona in his address said the purpose of the orientation programme was to involve every member of the legislative assembly and their staffs to learn about the rules, proceedings and conduct of business of the assembly.
Stating that the legislative assembly would “soon be transformed and digitized through the National e-Vidhan Application (NeVA) project,” the speaker said once the e-Vidhan is implemented it would be very helpful for the members.
“We will probably be able to run the entire assembly on the e-platform by the coming winter session,” said Sona.
Deputy Speaker Tesam Pongte highlighted the functioning of the state legislative assembly. He lauded the members for their active participation in the programme.
Tali MLA Jikke Tako and Legislative Assembly Secretary M Lasa also spoke.
The two-day orientation programme was organised by the Lok Sabha’s Bureau of Parliamentary Studies & Training, the union parliamentary affairs ministry, and the Arunachal legislative assembly. It featured discussions on ways, means and procedures of the legislative assembly, as well as the NeVA. (DCMO)