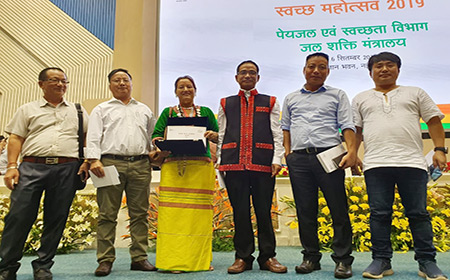 ITANAGAR, Sep 6: Opung Jerang of Siang district has been conferred the Swachh Bharat Award in recognition of her active participation in spreading awareness about the objectives of the Swachh Bharat Mission (Gramin).
The national award was presented to Jerang by Union Jal Shakti Minister Gajendra Singh Shekhawat during the National Swachhata Mahotsava, which was organized in New Delhi on Friday by the jal shakti ministry’s drinking water & sanitation department.
President Ram Nath Kovind also attended the ceremony, along with Arunachal Pradesh SBM (G) Director Sentum Yomcha and senior officers of Arunachal’s PHE&WS department.
Under the initiative of Jerang, who is the chairperson of NGO Iiri Leyi Demong Rampa Mohila Mondal, Siang district attained ODF status in December 2017.
The NGO and the department concerned are now actively involved in sustaining the ODF status of the district.