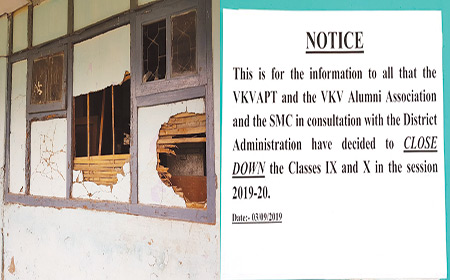 [ Nellie N Manpoong ]
SHER, Sep 7: Taking serious note of the reports of sodomy that allegedly took place over a period of time at the Vivekananda Kendra Vidyalaya (VKV) here in Papum Pare district, members of the Child Welfare Committee (CWC) visited the school on Saturday morning along with teams from the district child protection unit (DCPU) and the Childline.
Before sitting with the school authorities for an official meeting, the joint team of the CWC, the DCPU and the Childline cautioned the authorities that if the allegations are true, they could be penalized with six months of jail time for trying to hide the facts, under the Protection of Children against Sexual Offences Act. It may be mentioned that the school authorities were cooperative with the visiting team.
Later, the joint team held a meeting with the school authorities to analyze the allegations in depth, and also held one-on-one counselling sessions with over a hundred hostellers from Classes 4 to 8.
The children were asked about their knowledge of good touch and bad touch, and enquiries were made as to whether they were victimized in any way during their time in the school.
“We have given the Childline’s toll-free number, 1098, to all the children we met today, and told them that they can call this number any time if they face any problem that they cannot disclose to us right now,” the team said.
While the team said it could not divulge further details of the counselling sessions, Capital Complex CWC chairperson and
advocate Kani Nada Maling informed that a detailed report will be prepared and submitted to the DCPU.
Maling, who also holds the additional charge of the Papum Pare CWC, appealed to all to contact the toll-free number, 1098, if they feel that a child requires protection.
Apart from volunteers of the Childline, DCPU Protection Officer Techi Ayum, Legal Probationary Officer Tarh Nagu, and counsellor Nabam Bapu were also part of the visiting team.

Meanwhile, the VKV has decided to close down Classes 9 and 10 for the 2019-20 session, after the boys of the school went on a rampage on the afternoon of 27 August, destroying and damaging several portions of the school infrastructure.
The decision was taken jointly by the VKV Arunachal Pradesh Trust, the VKV Alumni Association and the school management committee (SMC) during a meeting held on 3 September. The parents of the students, who were under a week’s suspension at the time, had also been called for the meeting, while the Kimin ADC had come to look into the law and order situation, the school authorities said.
Regarding the effect it would have on the students who were not involved in the rampage, the VKV’s Principal, Padmanabhan VP, said “dialogues are going on to find a solution, especially for the day scholars and girl students, who were not involved.”
He also said that “the school has received complaints of bullying from parents, but so far none of the boys has come out to complain against the seniors.”
SMC chairman Tana Ram also said the senior student in question “used to harass the junior boy and make him run errands or steal items.”
Reportedly, the senior student was put under suspension for 10 days, as per norms, but the parents sought a transfer certificate (TC), which was given to them immediately by the school.
“The student instigated the other boys before he left. The TC was issued at around 11.30 am, and the other boys went on a rampage at around 2.30 pm. The day scholar girls were not involved at all, and it was done by the boys from the hostel. A few other boys were also not involved in the incident,” Ram said.
According to the school’s principal, after the TC had been handed over, “the classmates of the boy, as well as his friends, came to the staff room and started to blame the teachers, used abusive words, and started to damage the school property. They also threatened to assault teachers.”
“In the complaint (made by the junior student), it is clearly written that the senior was forcing him to bring petrol from outside, as well as to bring cigarettes and bidis,” the principal said.
Regarding the report of alleged sodomy, the principal said, “These were baseless allegations against our school.”
Both the principal and the SMC chairman said no complaints of sodomy have been received from any of the students.