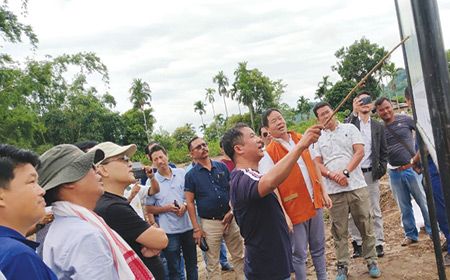 [ Taba Ajum ]
HOLLONGI, Sep 7: The inordinate delay in shifting the 156 Chakma families who are to be moved from the proposed site of the greenfield airport here in Papum Pare district is creating a hurdle in starting the airport’s construction.
The issue came to light when local MLA Tana Hali Tara along with several officers visited the project site on Saturday to review the progress of work.
Rehabilitation of the displaced families has now become a prime concern as the work cannot start until they are properly rehabilitated. It was brought to the notice of the visiting team that the estimated cost for the relief and rehabilitation (R&R) plan has already been submitted to the state government by the Papum Pare deputy commissioner, through the land management secretary, a week ago. The families are to be relocated within Hollongi, but in an area away from the vicinity of the airport site.
“The district administration is waiting for the fund to implement the R&R infrastructure and other provisions necessary for shifting the 156 Chakma families from the airport site,” a DA official informed.
Earlier, the families had lodged a complaint with the National Human Rights Commission (NHRC) against arbitrary expulsion of Chakma people from their temporary settlement area without any rehabilitation packages in the project. Later, the state government deposed before the commission that the families would be first rehabilitated, with all the provisions of R&R in place, before the commencement of the construction of the airport. Based on this, the NHRC closed the case.
On Saturday, the Chakma Rehabilitation & Resettlement Committee submitted a memorandum to the DC and the local MLA. They have appealed to the state government to rehabilitate them at the earliest, so that work on the airport may start sooner. Also, land acquisition for the four-lane approach road to the airport has not been taken up as the PWD (highway) division is yet to submit the approved strip alignment plan to the district administration.
It was also informed that the state government has not been able to finalize the executing agency for the four-laning work.
The officials of the Airports Authority of India (AAI) who accompanied the MLA said the last date for the submission of tender for the Hollongi airport project is 9 September, 2019, and the tender will be opened next month. They also informed that no bidder had participated during the first tender process, forcing them to go for a second round of floating tender.
Speaking on the occasion, the MLA thanked Chief Minister Pema Khandu for prioritizing the sanctioning of the airport project with active support from MoS Kiren Rijiju. He expressed hope that the airport project would be executed smoothly, and that the state government would sanction the necessary fund for implementing the R&R plan at the earliest.
“Every department will have to properly coordinate, so that work can be fast-tracked. This is a dream project and the state government is seriously working hard, so that the airport comes up soon. Therefore it is the duty of everyone involved in this project to work sincerely,” Tara said.
He asked the AAI officials to coordinate with state government. “Tell us what we can do for the AAI, so that the project starts as soon as possible,” he said.
It is to be noted that union MoS (Independent) for Civil Aviation, Hardeep Singh Puri, during a videoconference with Arunachal Chief Secretary Naresh Kumar had recently fixed 31 March, 2022, as the date for the completion of the greenfield airport project.
During Saturday’s visit to the project site, the MLA was accompanied by Papum Pare DC Pige Ligu and officers of the line departments, such as the PWD (highway) EE, the Yupia PHED division EE, the Doimukh PWD EE, the Poma RWD division EE, the power EE, the DLRSO, and others.