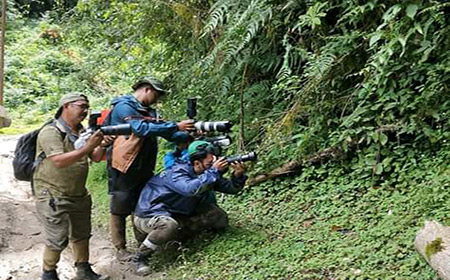 ZIRO, Sep 8: Over a 100 species of butterflies were documented during the 6th edition of the Ziro Butterfly Meet (ZBM) held at the Talley Wildlife Sanctuary (TWS) here in Lower Subansiri district recently.
This year, there were over 50 participants, including 32 from outside the state, who shared their findings of 105 butterfly species during the valedictory function on Sunday.
The key species recorded included the Bhutan Glory, the Brown Gorgon, the White Dragontail and the Manipur Jungle Queen. Three species – the Scarce Blue Oakleaf, the Hairy Angle and the Slate Awl – were recorded for the first time in Ziro. The elusive Apatani Glory was also documented.
Various presentations on butterflies and moths were made by resource persons Sanjay Sondhi from the Titli Trust, Dehradun, and Mohanprasanth P of the Act of Butterflies, Coimbatore, with a view to encourage knowledge-sharing among the participants.
Educational workshops were also arranged for students and local participants.
TWS Divisional Forest Officer Koj Rinya informed that the proposal of NGO Ngunu Ziro to declare the Kaiser-i-Hind as the state butterfly of Arunachal last year is in the process of being approved.
Earlier, on 4 September, the meet was inaugurated by Deputy Commissioner Chukhu Takar, who encouraged the participants to make the meet a knowledge-sharing platform. The DC also released a book titled Butterflies of Ziro. The book contains images and basic information about 186 different species of butterflies, mainly documented during the ZBMs. The website of Ngunu Ziro (https://ngunuziro.org/) was also launched on the occasion.
Ngunu Ziro has been organizing the ZBM since 2014.
The participants included butterfly experts and enthusiasts from Kerala, Tamil Nadu, Karnataka, Maharashtra, Gujarat, West Bengal, Sikkim and Assam, besides Arunachal.
Representatives of partner organizations like the Ashoka Trust for Research in Ecology and Environment, the Butterfly Group of North East India, and Butterflies and Moths of Sikkim were also part of the event.