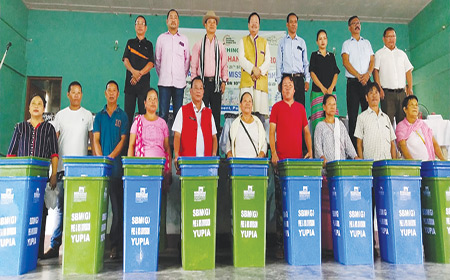 Staff Reporter
DOIMUKH, Sep 10: The Yupia PHE&WS division launched the Swachh Survekshan Grameen (SSG)-2019 for Papum Pare district at the Rono ground here on Tuesday.
Local MLA Tana Hali Tara along with Yupia ADC Tabang Bodung and other officers were present on the occasion.
Elaborating the importance of the SSG, PHE&WS SE Tayum Tok urged everyone to join hands to make Papum Pare
the cleanest district of the country.
“Prime Minister Narendra Modi launched the Swacch Bharat Abhiyan on 2 October, 2014, to fulfill Mahatma Gandhi’s vision of a clean India by 2 October, 2019, coinciding with the 150th birth anniversary of the Father of the Nation. Our state achieved open defecation-free status in 2017. The central government has entrusted an independent agency to carry out the SSG to find out whether the cleanliness level has been maintained, or if it has dropped,” the SE informed.
He urged the people to be part of the movement by maintaining cleanliness of their surroundings, and also by giving regular feedback.
The MLA in his address said cleanliness was directly related to climate change and global warming.
“We are dirtying our rivers and surroundings and destroying the forests for personal gains, without worrying about consequences. This has led to increase in temperature, and everyone can feel the negative effects of climate change. Therefore, cleanliness, besides keeping us healthy, also helps in saving the environment,” Tara said.
He appealed to the people to keep the rivers and streams clean, saying most of the diseases emanate from water sources. The MLA also advised the people to properly dispose of garbage and keep the villages and towns clean.
Earlier, the Yupia ADC praised the effort of the PHE&WS division in the cleanliness movement.
“The department is doing a good job, but unless people actively support it, the effort will go in vain. Together with active participation of people, we should strive to make Papum Pare the cleanest district,” said Bodung.
Yupia PHE&WS Division EE Tadar Ukap informed that the SSG will be conducted throughout the country, and that the ‘cleanest district of India’ will be announced on 2 October.
The MLA and the ADC distributed dustbins to beneficiaries, and later planted saplings in and around the Rono ground.