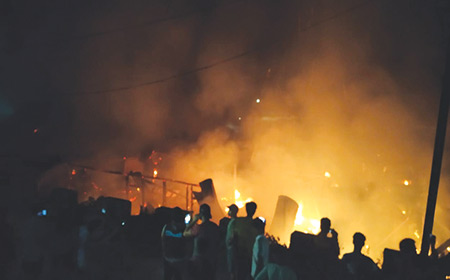 ITANAGAR, Sep 10: A massive fire broke out in Ganga village here at around 6:15 pm on Tuesday, reducing two OBT barracks with 30 rooms to ashes.
According to sources, the barracks had been let out to different tenants, most of whom are college students.
The fire also caused five LPG cylinders to burst, which further fuelled the flames. However, no casualty has been reported.
The capital SP and the fire station SP received calls about the incident at around 6:25 pm, and a fire tender was immediately sent to the village.
Two fire tenders were deployed to douse the fire before it could cause further damage. The firefighters were led by Fire Station Officer Koj Taro and Sub-Fire Officer Horda Lona.
Capital SP T Amo and Itanagar Police Station (PS) L/Inspector M Mibang also rushed to the spot to supervise the firefighting operation.
Personnel from nearby nakas and PCRs, mostly officers and jawans of the 138 Bn CRPF, were also rushed in, with Itanagar PS ASI AK Jha assisting the teams.
The public nearby also rendered assistance, and the fire was doused by around 7:40 pm.
The cause of fire is suspected to be an electric short-circuit, but the matter is currently under investigation, the capital SP informed.