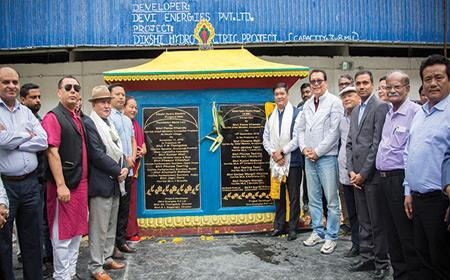 RUPA, Sep 13: Chief Minister Pema Khandu on Friday dedicated the 24 mw Dikshi hydroelectric project (HEP) here in West Kameng district to the people of Arunachal.
The CM switched on the device at the power house of the project, which is the first to be successfully developed by a private developer, Devi Energies Pvt Ltd, in the state.
In his address, Khandu said, “Arunachal is known as the powerhouse of the nation, and if (its) hydro potential is utilized fully, it could change the economic scenario of the state.”
Reiterating his stand that no project would come up without consultations with and consent of the locals, the CM commended the nearby villages that wholeheartedly supported the project.
He said his government is “exploring more potential HEPs in the district, and PSUs and serious private power developers, like Devi Energies, would be given priority for executing these projects.”
Urging the people not to fall prey to “issue mongers who make issues for their political gains,” Khandu said “it is time we changed our mindset and thought about what is good for us.”
The CM added that clean and green energy could change the economy of the state and the region.
Regarding the failure of several private developers in developing hydropower projects in the state, the CM informed that the state government has already terminated the MoUs for 22 projects (of 3800 mw potential) over non-performance, while notices have been served to private developers of 46 more (of with approximately 8000 mw potential).
He said action would continue to be taken against underperforming power developers.
Congratulating Devi Energies for completing the project on record time (its foundation had been laid in November 2016 by Khandu himself), the CM described the project as “also an achievement for the local community, since it was not possible without their cooperation.”
Khandu spoke about the state’s industrial policy, besides encouraging the villagers to concentrate on horticulture, which has great potential in the region.
“In order to make market links, the government will be developing a mini industrial park in Bhalukpong and a mega food park in Banderdewa,” Khandu said.
DCM Chowna Mein, who was also present, said the project would contribute to the region’s growth.
He said the state government is contemplating concentrating on smaller projects and according preference to public sector utilities and serious private power developers “like Devi Energies Private Limited” to take part.
Among others, former speaker TN Thongdok, former minister DK Thongdok (who is also the director of Devi Energies), and MLAs Phurpa Tsering, Jambey Tashi, Dorjee Wangdi, Tsering Tashi and Dongru Siongju were present. (CMO)