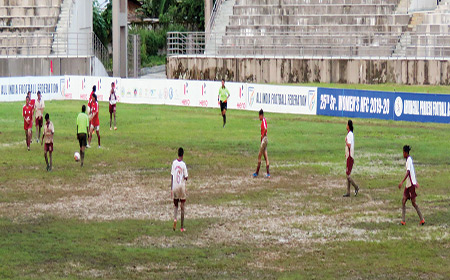 [ Prafulla Kaman ]
PASIGHAT, Sep 13: Mizoram and Haryana registered their first wins in the Senior Women’s National Football Championsip-2019, defeating their respective opponents, Andhra Pradesh and Karnataka, here in East Siang district on Friday.
Mizoram, who had lost their opening match against the Railways 4-0, beat Andhra Pradesh 4-0, while Haryana defeated Karnataka 5-0. Karnataka went down 0-3 to Bihar in their opening match on 10 September.
Assam and Railways played out a goalless draw to share points. Assam had beaten Andhra Pradesh by 9-0 in their opening match.
The match played between Madhya Pradesh and Bihar also ended in a 2-2 draw.
Meanwhile, the organizing committee has arranged an alternative field to conduct the championship in view of the worsening ground condition of the newly constructed stadium, which has become unfit to play the game on due to incessant rains over the last couple of days.