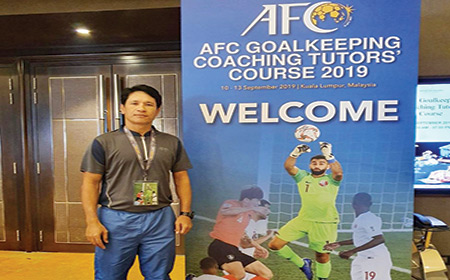 KAULA LUMPUR, Sep 13: Former Indian goalkeeper Gumpe Rime has completed a four-day ‘Goalkeeping coaching tutors’ programme organised by the Asian Football Confederation (AFC), which ended here in Malaysia on Friday.
The course was aimed at training trainers. It was conducted by tutor Frans Hoek, one of the best goalkeeping coaches in the Netherlands.
Currently, Rime is one of the only two coaches in India to have undergone the AFC goalkeeping level-three course. Rime works as coach instructor, having qualified as such from the All India Football Federation. He is currently working with Reliance Foundation.
In March 2019, Rime was the national team’s goalkeeping coach for the Indian U-23 qualifier in Uzbekistan. He had earlier represented India in the Asian Youth Championship in 1994.