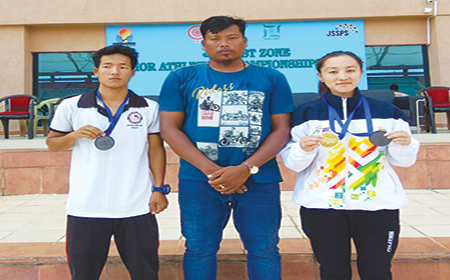 Staff Reporter
ITANAGAR, Sep 16: Joti Mane has become the first athlete from Arunachal Pradesh to win a gold medal in any national athletics championship.
The athlete achieved the feat when she won the 5000-mtr race in the girls’ U-20 category in the 31st East Zone Junior Athletics Championship, held in the capital city of Jharkhand, Ranchi, on 14 and 15 September.
Mane, a BA Semester-I student of Dera Natung Government College here, also bagged the bronze medal in the 1,500-mtr race in the event.
She is the daughter of Taling Mane and Yajum Mane of Shi-Yomi district. She is currently training under Arunachal Athletics Association (AAA) coach M Priokumar Meitei at the Sangay Lhaden Sports Academy.
Bamo Tanang bagged the second bronze and the state’s third medal in the 10,000-mtr race in the junior boys’ U-20 category in the event.
Hailing from Kurung Kumey district, Tanang is a Class 12 student.
Arunachal had fielded 10 athletes in the event.
In 2018, Anung Wangsu and Achik Wangsa had won a silver medal each in the 5000-mtr race and in shot put, respectively, in the East Zone Athletics Championship, which was held in Patna, Bihar, on 15 and 16 September.
The east zone comprises Bihar, Jharkhand, Odisha, West Bengal, Andaman & Nicobar Islands, and the eight northeastern states.
Arunachal Olympic Association president Padi Richo congratulated both the medal winners, especially Mane for winning the state’s maiden gold medal in the national level athletic championship.
AAA general secretary Kage Dodum has announced a cash prize of Rs 10,000 for Mane and Rs 5000 each for the bronze medal winners and the team coach.