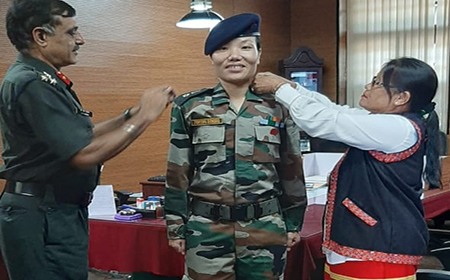 PASIGHAT, Sep 23: Adding another feather to her cap, the first lady Army officer from Arunachal, Major Ponung Doming, was promoted to the rank of lieutenant colonel on Monday.
Currently posted at Pune, Maharashtra, Doming is the daughter of Olom Doming and Jimmi Dai Doming of Pasighat, East Siang district.
Lt Col Doming, who did her civil engineering from the Walchand College of Engineering in Maharashtra, was commissioned into the Indian Army as a lieutenant in 2008. She rose to the rank of major in four-and-a-half years, and also served in the United Nations Peace Keeping Force mission in the Democratic Republic of Congo in April 2014.
When asked if she had any advice for the younger generation, particularly girls who intend to join the Army, she said, “My advice to young aspirants of our home state and the region is to dream big and, above all, have the courage to achieve or fulfill the dream.”
“I will consider myself blessed if am able to inspire even a single person to do whatever little we can for our country,” she said.