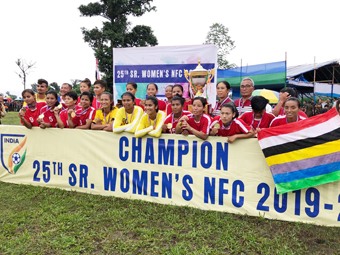 Staff Reporter
PASIGHAT, Sep 24: Manipur is the national senior women’s football champion for the 20th time.
The defending champion defeated the Railways by a solitary goal scored in the 67th minute of the game by captain Bala Devi, who was in impeccable form throughout the tournament.
The Railways encountered the first scare barely a minute into the game as Bala Devi took control of the ball but missed the net.

Manipur dominated the first half, but the team missed multiple chances to score.
The second half was keenly contested, but there were several missed opportunities by both the teams. Manipur goalkeeper Elangbam Panthoi Chanu was outstanding, as she did not give any chance to the Railways.
In the end, it was Manipur, the crowd favourite, which prevailed. 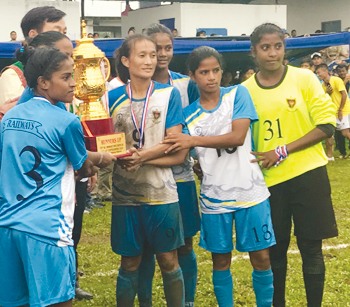 The Railways’ Sanju, Yumnam Kamala Devi and Loitongbam Ashalata Devi played splendidly, and so did Manipur’s Daya Devi, Irom Prameshwari and Ngangbam Sweety.
A portion of the ground was muddy because of rainwater, even though the Arunachal Pradesh Football Association (APFA) had worked overnight to drain the water from the ground.
The final match of the 25th Senior Women’s National Football Championship, which was played at the College of Horticulture and Forestry ground here in East Siang district, was witnessed by an estimated 8,000 football fans.
Earlier, APFA secretary Kipa Ajay said the issues that had cropped up during the tournament were a learning experience and would be addressed. He said this was the first time that the Arunachal women’s football team reached the quarterfinals of a national tournament.
“It’s just a matter of time before the Arunachal team arrives in the national scene,” he said.
APFA state coordinator Orin Lego said the fortnight-long event saw the participation of 29 teams. Jammu & Kashmir, which was in the same group as Arunachal, did not turn up for the tournament.
Forty-nine matches were played at three venues, all marred by rains.
Sanju of the Railways was declared the most valuable player of the tournament, while Elangbam Panthoi Chanu got the best goalkeeper’s award.
With 21 goals, N Bala Devi was the highest scorer of the tournament.
DIPRO adds: Lok Sabha member Tapir Gao in his address during the concluding function said Arunachal is ready to host more national level events.
He said the event was not only a national level football tournament but also a celebration of “unity, friendship and sportsmanship among all Indian communities.”
Gao extended gratitude to Chief Minister Pema Khandu, union Youth & Sports Minister Kiren Rijiju, the All India Football Federation and the APFA for hosting the event successfully, stating that “we have proven our capacity as a host.”
“Playing of Indian women’s football captain Ashalata Devi has given us immense pleasure and (it is a) matter of pride,” he said, adding that hosting the event finally put Arunachal on the national sports map.
“Football is not just a sport but also develops personality, besides physical fitness and discipline in life. Therefore, parents should encourage their children to take part in sports,” Gao said.
He conveyed special thanks to all the 29 participating national players, and expressed hope that they would spread the message of hospitality and friendship of Arunachal on their return.
Sports Minister Mama Natung termed the event “historic,” and said the leadership of Khandu, Rijiju and all members of ‘Team Arunachal’ was appreciable.
He also conveyed his gratitude to the officers, leaders, NGOs and the public of Pasighat for their coordinated efforts and support in making the event a grand success.

APSCW c’person urges women to speak up for their rights