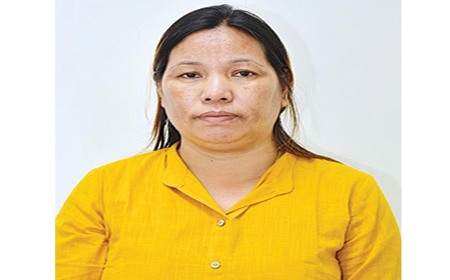 Staff Reporter
ITANAGAR, Sep 28: Going beyond party lines, all political parties of the state on Saturday declared Chakat Aboh, wife of slain MLA Tirong Aboh, the consensus candidate for the bye-election to the Khonsa West Assembly constituency in Tirap district.
The decision came after Chief Minister Pema Khandu convened an all-party meeting in his office at the civil secretariat here, seeking the other parties’ support to Chakat Aboh’s candidature.
The chiefs of political parties, such as state BJP president Tapir Gao, APCC president Nabam Tuki, state NPP president Nima Sangey, NPP general secretary Mutchu Mithi, PPA chairman Kamen Ringu, and state JD (U) president Ruhi Tagung, among others, attended the meeting.
All the parties resolved to support Chakat Aboh as an independent candidate for the bye-election, and stated that none of the political parties would field any candidate against her.
The parties’ leaders expressed sympathy for the family Tirong Aboh, who, along with his son and nine others, were massacred by suspected NSCN (IM) militants on 21 May, days before the election results were declared.
Addressing media persons after the all-party meeting, the chief minister informed about reaching the consensus.
“In the first session of the seventh legislative assembly, I had assured the house that when the bye-election was declared, I would call an all-party meeting to discuss the bye-election and work as ‘Team Arunachal’,” Khandu said.
“This morning, the respective political parties’ state unit presidents had a meeting, and all representatives expressed sympathy for late Tirong Aboh’s family and the innocent people who were killed along with him. We came to the conclusion that all the parties would support Chakat Aboh’s candidature as an independent candidate in the coming bye-election,” he said.
Terming the decision “wonderful and positive,” former chief minister Tuki said, “We emotionally gave consensus to Aboh’s family, and we promised to support Chakat Aboh’s candidature in the bye-election.”
Gao on his part said the collective decision was taken in view of the situation in Khonsa and the tragedy that struck the Aboh family.
“Never before in Arunachal’s political history was such decision taken. I appreciate the leadership of Chief Minister Pema Khandu and fellow political parties’ presidents for supporting Chakat Aboh,” Gao said.
On the BJP’s April 2019 candidate Phawang Lowang’s press statement, Gao said the party did not endorse him but gave him permission to convene the press conference. “Whatever Lowang said, he said in his personal capacity; the BJP has nothing to do with it,” said Gao.
On the other hand, Mithi said, “Election is not only about party. It’s about emotion and humanity. We congratulate her (Chakat) on being the consensus candidate.”
Chakat Aboh expressed gratitude to the chief minister for building consensus on her candidature.
“I thank all for supporting me. Whatever I do, I will do for the cause of Khonsa West assembly constituency,” she promised.
The bye-election is scheduled to be held on 21 October.