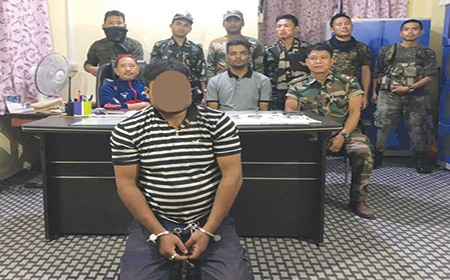 [ Karyir Riba ]
ROING, Sep 29: The anti-drug squad (ADS) of the police department here in Lower Dibang Valley district arrested a drug supplier along with drugs from Shantipur area here on Saturday evening.
The supplier, who has been identified as one Gobinda Gogoi of Assam’s Chapakhowa, was arrested based on information gathered from local boys (drug users) who used to purchase drugs from him, said ADS nodal officer, SI SS Jha.
Reportedly, Gogoi had been supplying drugs to the youths here for the past few years. A case under the NDPS Act has been registered against him, and further investigation is underway.
The police team included OC Nyumyum Sora and DSP (HQ) Ringu Ngupok.
The police department, which is cracking down on drug-peddling activities, has arrested eight drug peddlers during this month and seized approximately 200 gms of brown sugar from them.