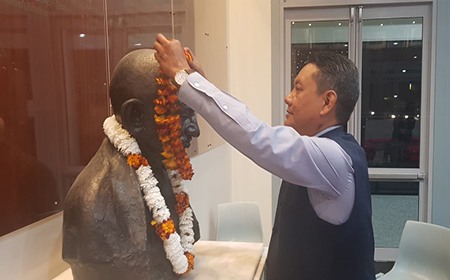 AUCKLAND, Oct 2: State Legislative Assembly Speaker Pasang Dorjee Sona on Wednesday celebrated the 150th Gandhi Jayanti with the Indian community at Mahatma Gandhi Centre, Auckland in New Zealand.
The day-long programme was organised by the Indian Association of Auckland, New Zealand. Various Indian communities, MPs of New Zealand and the Honorary and Consulate of Indian High Commission of Zealand also attended the programme.
Addressing the Indian community, the Speaker lauded how the Indian diaspora has preserved the Indian culture abroad. He said, “I feel really proud when we see our Indians across the globe has preserved culture and passed it to the next generation. I thank the Indian community for inviting me to this beautiful event to witness our culture being displayed by the young children of Indian origin. This will keep them rooted to their culture and understand the real flavour of India i.e. Unity in Diversity.”
While speaking on Gandhi, Sona said, “Gandhi does not belong to India only. He belongs to the world. He was a great soul. Gandhiji taught us we human to be more “humane”. He taught us to be compassionate towards others. His words are becoming more relevant in this contemporary world.”
Citing how Gandhi advocated for making this world a better place to live in, Sona quoted Gandhiji and said, “Be the change you want to see in the world.”
Later Honorary Consulate Bhav Dhillon and Bakshi, MP and few more MPs from New Zealand spoke on the occasion.
Earlier, Sona paid floral tribute to the portrait of Mahatma Gandhi and former prime minister Lal Bahadur Shastri.
The students of Gujarati School presented Bhajans and cultural programmes. They presented act on the famous Champaran Satyagrah movement and Dandi March. The school students also narrated the life story of Gandhi and Lal Bahadur Shastri.