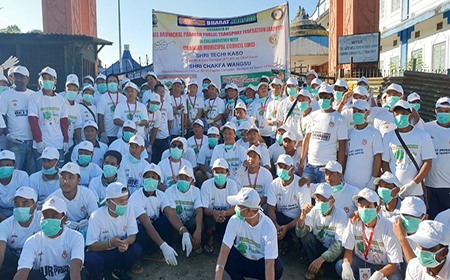 ITANAGAR, Oct 3: Plantation and cleanliness drives continued to mark the 150th birth anniversary of Mahatma Gandhi in various parts of the state.
In Changlang district, numerous government employees, members of business community, NGOs, shopkeepers, students, gaon burahs and public took part in a mass cleanliness drive organized by the Bordumsa administration under ‘Swatchta Hi Seva’ campaign in and around Bordumsa town and nearby villages on 2 October.
The huge amount of garbage collected during the drive was later disposed at a selected dumping zone.
Later, Bordumsa ADC Devansh Yadav handed out prizes to the winners of essay competition on Swatchta Hi Seva campaign.
Bordumsa CHC medical officer in-charge distributed iron syrup and tablets for anaemic kids and pregnant women to 22 Anganwadi centres, while the Bordumsa CDPO distributed height and weight measuring machines and haemoglobin check kits.
Sanitary pads were also distributed to the students by BRCC and SHG while the department of PHE& WS, Bordumsa unit distributed dustbins to the bazaar committee, NGOs, schools, etc during the programme.
To commemorate the 150th birth anniversary of the Father of the Nation, a debate competition was held at government secondary school (GSS) Bizari under Lower Dibang Valley district by the Society of Education and Environmental Development (SEED). Twenty students participated on the topic- “Mobile phone: merit & demerit for school students”.
School Headmaster Tony Pertin appreciated the SEED for adopting Bizari GSS under the SEED’s educational venture.
The All Arunachal Pradesh Public Transport Federation (AAPPTF) in collaboration with the Itanagar Municipal Council carried out a day-long mass cleanliness drive from the RK Mission Hospital to the Civil Secretariat hereon Wednesday.
Local MLA Techi Kaso called upon everyone to maintain cleanliness at all times and to bring ‘change in mindset’ to make the capital city a clean and green place to live in.
“If there is garbage or littering, the people should take the pain to call the authorities concerned. You may also call me or the deputy commissioner in such cases,” Kaso added.
AAPPTF president Dobing Sonam, while highlighting the theme of the drive – ‘Say No to Plastic’ said, “Even though plastic has become an inevitable part of our lives, it is time that we should learn to live without it.'”
Capital Complex district transport officer Chakfa Wangsu also spoke on the occasion.
At Jullang, a plantation-cum-cleanliness drive was conducted jointly by the National People’s Party youth front and NPP city unit at the Himalayan University campus on Wednesday.
NPP city unit president Charu Hari exhorted the youths to take up plantation drives on regular basis to protect the environment and appealed to them to educate the society about the importance of flora and fauna. (With DIPRO inputs)