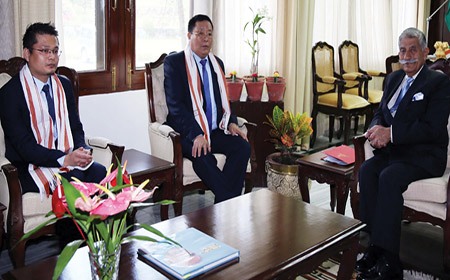 We have a lot to learn from Bhutan: CM

ITANAGAR, Oct 11: Governor BD Mishra took up the issue of the Lumla-Tashigang road with Bhutan’s Consul General, Phub Tshering, during a meeting at the Raj Bhavan here on Friday.
Mishra said the road would play a vital role in strengthening the border trade between India and Bhutan, besides reducing the distance from Tawang to Guwahati, via Samdrupdzongkar, by 155 kms, when the road is laid.
“Apart from giving an alternative road for the people of Tawang to reach Guwahati and other parts of the country, the road will save the lives of many patients when the existing road gets blocked due to rain, snowfall or landslides,” Mishra said.
The two discussed various bilateral issues for strengthening the age-old relationship between the two neighbouring countries, particularly between Bhutan and Arunachal. The governor said Arunachal and Bhutan have strong cultural links as there are similarities in their cultural heritages.
Mishra suggested to the consul general to enhance tourism and cultural exchange programmes between students of Arunachal and Bhutan.
Lauding the high sense of cleanliness of the Bhutanese people, Mishra said there is a lot to learn from the people of that country in this regard.
Tshering is on a two-day visit to the state, which shares one of its international boundaries with Bhutan, which has close cultural and religious affinities with the western districts of the state.
The consul general, who was accompanied by Consul Phuntsho, also made a courtesy call on Chief Minister Pema Khandu at the latter’s office here on Friday.
During their informal discussion, Khandu emphasized the need for connecting Bhutan by road from Tawang, which he said would boost the tourism sectors of both Bhutan and India, and benefit Arunachal. He said the road on the Indian side, in Tawang district, is almost ready, but the construction is yet to begin on the Bhutan side.
The CM informed the consul general, who has consular jurisdiction over Arunachal, Assam, Meghalaya and Nagaland, that with the support of the central government, surface and air connectivity in the state has received a major fillip in the recent years.
While rail connectivity from Bhalukpong to Tawang is expected to be completed by 2020, a proposal has also been made for establishing an airport in Tawang, he said.
“If we open the road from Tawang to Bhutan, both our state and Bhutan will immensely benefit. It’s a win-win situation for both of us,” Khandu said.
The CM said his government is ready to sort out any concern of the Bhutan government. He even proposed that “till the road materializes, a ropeway could be constructed to attract tourists.”
He commended Bhutan on its progress and sound economy despite being a small Himalayan kingdom.
“We have a lot to learn from Bhutan, especially in optimally utilizing our rich hydropower and tourism potentials, which are more or less the same as in Bhutan,” he said.
Tshering acknowledged the huge tourism potential of Arunachal. He said the Arunachal government could collaborate with Bhutan in this sector, and suggested focusing on high-end tourism to generate revenue.
“This is a big state and it has huge potential,” he said, and offered assistance and cooperation of his office based in Guwahati (Assam) in any fruitful endeavour. (Raj Bhavan & CMO)