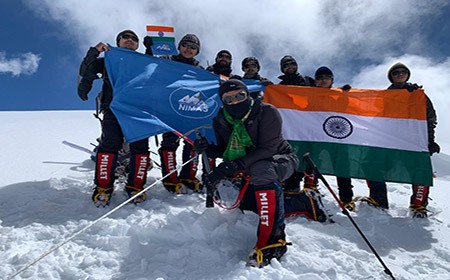 ITANAGAR, Oct 11: Chief Minister Pema Khandu said the Dirang (West Kameng)-based National Institute of Mountaineering and Allied Sports (NIMAS) “can play a lead role in promoting (adventure) tourism in Arunachal.”
Khandu, who flagged in a 31-member team from the NIMAS that summitted one of the peaks of the Mt Kangto range – the highest in Arunachal – last month, said Nepal’s tourism sector receives a major thrust every season because of Mt Everest.
“Likewise, we should also explore and earmark certain peaks that would attract adventure enthusiasts every season,” he said.
Congratulating the team headed by NIMAS Director Col Sarfraz, Khandu said “the state is proud of their achievement as this is the first time in the known history that one of Mt Kangto’s massifs has been conquered.”
Divided into three teams, the first team reached the summit on 26 September, while the second and the third teams summitted the peak the next day.
The CM advised the team to formally stake the claim of “being the first team of a huge contingent of 31 members” ever to summit a virgin peak which is counted among the highest in the world.
“Because of the activities initiated by the NIMAS, our state has benefitted immensely. Today our youths are taking up adventure sports like mountaineering seriously. The fact that this 31-member team consists of 10 Arunachalees is a befitting example of this fact,” said Khandu.
Describing mountaineering as an important sector with regard to tourism prospects, Khandu suggested to the NIMAS to “take the responsibility of promoting it to boost tourism.”
He gave the example of Mt Everest, which has become the epitome of mountaineering and a major attraction for adventure tourists.
“The NIMAS may take a lead in this direction, not only in mountaineering, but also in other adventure sports like trekking, cycling, rock climbing, paragliding, mountain biking, zip lining, etc,” Khandu said.
Informing that the state government is organizing several festivals across the state, the CM urged the NIMAS director to take up adventure activities in these festivals, in order to “add spice to the festivities and lure adventure tourists.”
He said the state government is ready to collaborate with the NIMAS in this direction.
“If we can do so, we will not only be generating revenue but also create huge employment opportunities for our youths,” he said.
“To begin with,” he said, “the NIMAS can join in the North East Festival,” which is proposed to be held at Tawang sometime in December this year.
Khandu, who is also the vice president of the NIMAS, assured to provide all support and cooperation to the institute in its future endeavours, one of which is the ambitious aim to summit Mt Kango, in West Kameng district, along the Sino-India border, next year.
Giving details of the expedition, Col Sarfraz said it was one of the most difficult summits ever.
“Each member carrying a load of 15 to 25 kgs, opening routes, making eight logistics camps, crossing two virgin glaciers, travelling a total distance of about 300 kms, makes it the toughest,” he said.
The team members, among whom were several Everesters and seasoned mountaineers, categorized the scaling of Mt Kangto 6 as the toughest of all so far.
Col Sarfraz informed that the range consists of seven peaks, the highest being Mt Kangto at 7,060 metres. Mt Kangto 6, which the NIMAS team conquered, stands at 6,060 metres, and the rest of the peaks are yet to be conquered, he said.
Later, the chief minister felicitated the 31 team members with tokens of appreciation and certificates. (CMO)