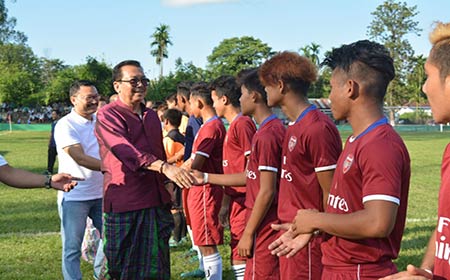 NAMSAI, Oct 13: Deputy Chief Minister Chowna Mein urged the people of the state to dedicate time to fitness and lead a healthy life.
He was speaking during the inaugural event of the second edition of the Namsai Champions Trophy, organised by the Namsai District Football Association, here Sunday.
He also called on youths to take inspiration from Minister of Youth Affairs and Sports Kiren Rijiju for “a disciplined and fit lifestyle and leading from the front to make fitness a national movement.”
“Along with sportspersons, commoners should also participate actively to stay fit and healthy and make the fit India movement a way of life,” he said.
He also advocated for promotion of sports on a serious note while also expressing his concern over the youths leaning towards drug abuse. He said the drug abuse was gaining an alarming proportion which must be contained.
Mein also recalled legendary footballer of Arunachal Pradesh, late Chow Indrajit Namchoom and announced the naming of the stadium coming up at Namsai in his memory.
He also announced for naming the Government Polytechnic College, Namsai in memory of former minister and legislator of Namsai, CP Namchoom.
MLA Namsai Chow Zingnu Namchoom also spoke on the occasion.
Pasighat (West) MLA Ninong Ering, Lekang MLA Jummum Ete Deori, DC Bijoy Talukdar, and former commissioner Tape Bagra also attended the event amongst others.
The inaugural match was played between Tafragam FC and Lathao Youths. Tafragam FC won the match by 5-1. (DCM Media Cell)