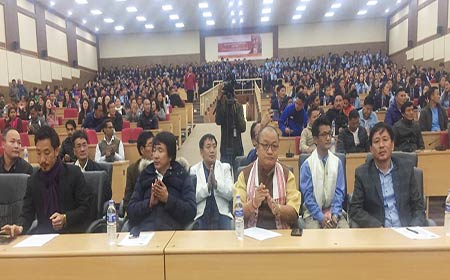 TAWANG, Oct 13: “While promotion of Hindi is very important for people-to-people contact in the larger context, preservation and use of native languages and dialects of Arunachal is also equally important,” said Arunachal Hindi Sansthan chairman Tatam Sonia during the ‘Hindi Ko Salaam’ programme on Sunday at the Kalawangpo convention hall in Tawang district.
Addressing a gathering here during the programme organised by the Arunachal Hindi Sansthan, Itanagar, Sonia also said, “Arunachal Pradesh is a diverse state with all its 26 major tribes and hundreds of sub-tribes speaking their own dialects or languages but lacked a common language of its own, and without a common language, Hindi has come in to fill that vacuum.”
In his address, Arunachal Hindi Sansthan chief advisor Tai Tagak said, “Hindi is the language of national integration and national identity. Use of Hindi language evokes a sense of pride among its speakers,” and asked the young students present in the progra-mme
to use Hindi in their day-to-day lives with pride.
Chief Guest of the programme, Lungla MLA Jambey Tashi informed that “most developed countries use their national language in the conduct of international engagements, and similarly, India can also progress and achieve its goal with the use of Hindi.”
Sunday’s programme included poem recitations, singing of patriotic songs, presentation on conservation of environment and water, etc.
Students from various schools of Tawang, the Dorjee Khandu Government College, Tawang and public attended the programme.
The Arunachal Hindi Sansthan has been working here since 1994 under the initiative of then Governor of Arunachal Pradesh, Mata Prasad.