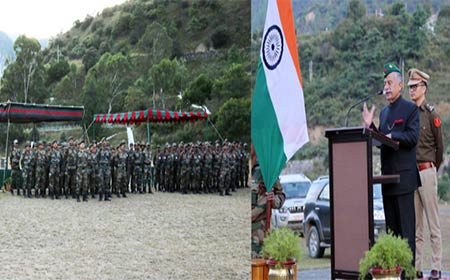 RUPA, Oct 15: Governor BD Mishra addressed the officers and troops of the 5 Mountain Division here under West Kameng district on Monday and exhorted them to be physically fit, professionally competent and enhance their battle worthiness.
Addressing the officers and troops of the ‘Ball ofFire’ division, which included Major General SC Mohanty, the governor said that India is now on the march as a strong nation and the Indian Armed Forces jawans are the foundation of it.
The governor said that secured national frontiers are the prerequisites for a progressive nation and strength behind the secured border is the Indian Armed Forces soldiers. Therefore, he said, each and every soldier has a huge responsibility towards the security of the nation. While reposing his confidence in the soldiers, he said that patriotism is imbibed in all the officers and troops of the ‘Ball of Fire’ division.
Sharing his experience of 1962 war, 1965 war, 1971 war, Indian Peace Keeping Force Operations in Sri Lanka Operation and Kargil war, the Governor said that today the troops have better weapons, amenities and better scope for promotion. He advised them to avail of it and prepare themselves even for the ultimate sacrifice for the territorial security of the country.
As a goodwill gesture, the governor felicitated the youngest officer of the division, Lieutenant Nishit Jalan of the 30 Rajput, youngest Naik Subedar Rajendra Singh of the 14 Raj Rif and youngest soldier Sipahi Ravi Chauhan of the 30 Rajput.
Meanwhile, his wife Neelam Misra interacted with ladies of the Army Wives’ Association at Tenga House, Tenga. She exhorted them to learn about the unique traditions and cultural heritage of Arunachal Pradesh’s indigenous communities.
Sharing her experience, she informed that after coming to Arunachal Pradesh, she has learned traditional loin loom weaving. She advised the ladies to know about the exotic handicrafts, textile and handlooms of Arunachal Pradesh and connect themselves with the local communities. (PRO to Raj Bhavan)