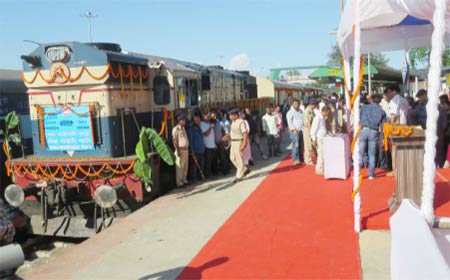 [ Prafulla Kaman ]
JONAI (Assam), Oct 15: The Northeast Frontier Railways (NFR) has introduced passenger train service between Murkongselek (Jonai) and Dibrugarh, which was inaugurated by Union Minister of Railways Piyush Goyal from New Delhi by remote control on Tuesday.
With the minister’s inauguration of the service, Divisional Railway Manager (DRM) of Rangiya, Vidyasagar Abhinash Malegaonkar, accompanied by NFR officials flagged off the train service at Murkongselek station this afternoon.
Operation of a passenger train between Murkongselek and Dibrugarh via Bogibeel Bridge was a pending demand of the local people as many people of Siang district (Arunachal) and Dhemaji regularly go to Dibrugarh for medical, educational and commercial purposes every day.
The new train has been scheduled to start from Murkongselek station near Ruksin town (East Siang) at 8.45 am and will reach Dibrugarh at 12.15 noon. It will return in the afternoon along the same route every day.
The train is equipped with 19 bogies, including first class and general class coaches.
The NFR authority, under its Rangiya division has already introduced a pair of passenger train service linking Dibrugarh and Dekargaon in Assam’s Sonitpur district through the rail route, which is a part of Rangiya-Murkongselek BG railway.
At present, three pairs of passenger train services, including Intercity Mail (Lachit Express) from Murkongselek to Kamakhya (Guwahati), Murkongselek to Rangiya, Murokongselek to Dekargaon and vice-versa, besides some good trains are running along the route on regular basis.
The local people also sought from the railway ministry, the introduction of a Rajdhani Express, connecting Murkongselek and bordering eastern Arunachal districts with New Delhi on regular basis.